The Order of Malta

The Order of Malta is a lay religious order – the fourth oldest – following the eastern Basilians, the Augustinians and the Benedictines.

During the latter part of the 1st Century AD, European Christians made pilgrimages to the Holy Land – where they arrived weary, sick and, often injured. In 1048 AD, Merchants from the ancient Marine Republic of Amalfi obtained from the Caliph of Egypt, authorization to build a church, convent and hospital in Jerusalem, to care for pilgrims of any religious faith or race. Hospice comes from the Latin for stranger or guest. The hospice grew to 1000 beds.

The founding monk of this hospice was Gerard – called Fra’ – short for Frater – Latin for brother.  Many pilgrims joined Fra’ Gerard’s lay religious fraternity – taking vows of poverty, chastity and obedience.  Although current-day knights and dames are not required to take the vows, about one percent of the current-day Knights take such vows.

In 1099 AD, the knights of the First Crusade conquered Jerusalem.  Fra’ Gerard rendered great service to the Crusader knights, helping the wounded and sick. Many knights saw this work as a way of following in Christ’s footsteps and joined Fra Gerard’s fraternity.

The knights served the sick in Fra’ Gerard’s hospital and, in so doing so, they became known as Knights of the Hospital or Hospitaller Knights.

The Order of Malta is also an Order of Chivalry. An “order of chivalry” is a group of knights who form under a code of conduct and take on a name for their Order.

This religious fraternity became the first “order of chivalry”. As the hospice was next door to a church named after Saint John the Baptist, they became the Knights of Saint John of Jerusalem. In 1113 AD, the Order was brought under the protection of the Holy See, becoming a Papal Order Of Chivalry, indeed, the first.

In the mid 1120’s, the constitution of the Kingdom of Jerusalem regarding the crusades obliged the Order to take on the military defense of the sick, the pilgrims and the Holy Land. The Order thus added the task of defending the faith to that of its Hospitaller mission.

As time went on, the Order adopted the white eight-pointed Cross that is still its symbol today.

In 1291 AD, the Ottoman Turks drove the Knights out of the Holy Land. In 1306, the Order moved to Rhodes, where they built strong defenses and developed a navy that became the most powerful in the Mediterranean. They built a magnificent hospital.

In 1530, they moved to Malta and, by the mid 1500’s, the Knights of Saint John had fortified the Isle of Malta – and built a hospital. 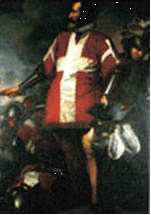 In 1565, Suleiman the Magnificent and his army of 40,000 men laid siege of to the Island of Malta. A small group of Knights of Saint John – about 560 Knights, 1200 of the Order’s Sergeant-at Arms and 400 Spanish soldiers – broke the siege, saving Christian Europe.

The Grand Master of the Order during the siege was Fra Jean de Vallete-Parisot shown in his red battle tunic with white  cross.

After the Siege of 1565, the knights built a new city – Valetta – with a 2000 bed hospital – the largest, best-equipped and most efficient built hospital of its time.

From its beginning, the independence from other nations granted by Pontifical deed, and the universally recognized right to maintain and deploy armed forces, constitute the grounds for the international sovereignty of the Order.  Thus it’s formal name – The Sovereign Military Hospitaller Order of Saint John of Jerusalem, of Rhodes and of Malta.

The Order of Malta is thirteen thousand Knights and Dames – in fifty-five countries – upholding the Order’s noble pledge to:

Like all Orders, the aim of the Order of Malta is the greater glory of God through the sanctification of its members. And, as with all orders, it reflects the special charism of the ideals of its founder. Its dual duties, by which members strive for their sanctification, are part of the motto of the Order “tuition fidei et obsequium pauperum” – the Defense of the Faith (although no longer with arms) and the care of one’s neighbor in “our lords – the sick and the poor”.

The spirituality of the Order is rooted in its religious and chivalric character and its Hospitaller tradition. The Order has always been and still is a lay religious order. It has chaplains but it is not a clerical order.

Members cannot fulfill their duty merely by financial contributions. Unless infirm, their active personal involvement is required. In the past, membership, at times, and by some, has been viewed as a reward for past service or support of the Catholic Church. It is now properly recognized as a commitment to spiritual development through personal service and sacrifice.

Accepting the Cross of the Order imposes duty and sacrifice. Knights and Dames are obliged to Hospitaller service as well as defense of the Faith. Wearing of the insignia of the Order obliges members to use all of their efforts for the benefit of the Order. Except for support of a member’s parish and diocese, it is desirable that all charitable activity undertaken by a member be carried out through the Order.

The Order began with the care of pilgrims. Each year, around the first weekend in May, The Grand Master leads a pilgrimage of about 4000 to Lourdes. National Associations from around the world bring hundreds and hundreds of their sick. For six days, Knights and Dames take over as care-givers – carrying the sick to daily Mass, the baths, reconciliation, the Stations of the Cross and other spiritual-uplifting experiences. 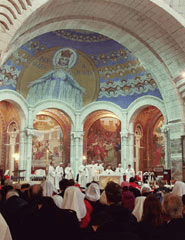 As part of the ceremony in Saint Patrick’s Cathedral in New York City, each candidate recites the following:

I promise, calling on the name of God, in chivalrous fidelity, always to bear witness to the Catholic Faith, to defend the Church, and to lead my life in accordance with the teachings of Holy Mother Church. I declare myself ready to obey the Constitution, the statues, and the Rule of the Order, and to fulfill with fidelity and diligence whatever the Order and my superiors impose on me. To all this, so help me God, our Lady of Philermo, Saint John the Baptist our glorious patron, Blessed Fra’ Gerard our founder, and all the Saints of our Order. You here present I also call to witness my commitment.

In order to fulfill the first part of their pledge, Knights and Dames: 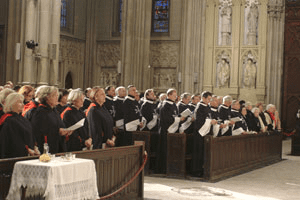 In order to fulfill the second part of their pledge, Knights and Dames serve:

Membership is by invitation only.