By John L. Carkeet IV, Special to the Diocese of Venice

Drive near Epiphany Cathedral Catholic School in Venice on any Wednesday afternoon and you might spot a group of 20 children dressed in camouflage caps, red shirts, khaki pants and sneakers, voluntarily participating in exercises that look vaguely military. 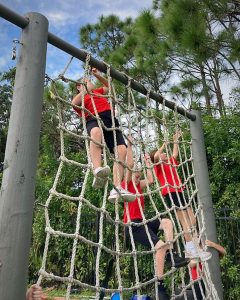 The 20 members of the new afterschool program – the Young Marines – are learning leadership and discipline while building up their Catholic values.

“Part of my job is to instill the Catholic values through the Young Marines,” said Col. (Ret.) Richard J. Borkowski, a retired U.S. Army veterans who leads the program. “Those values are infused within the Church and the Epiphany Cathedral Catholic School curriculum. The members look to me for guidance and leadership in all things related to the program, though I look to them to reinforce the Catholic values throughout the ranks.”

And the ranks of the Young Marines at ECS take this life-long commitment to heart.

“[The Young Marines] is about serving others,” said River Kehoe, 10, who is in the program with siblings Skylar and Alex. “As God’s children, we must live the life Jesus taught us and help others build stronger communities.”

While Borkowski has witnessed his Young Marines grow from a physical and academic perspective in the short time the program has been operating, more importantly he has also seen a spiritual maturity. 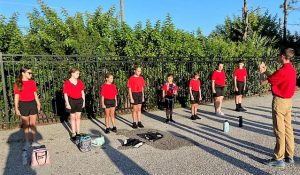 This is in part because many of the time-honored traditions of the U.S. Marine Corps overlap Catholic values and Christ’s teachings, so it comes as no surprise to Borkowski that those in the program have already developed a stronger bond with the Catholic Faith while they learn and live core values such as respect, integrity, and dignity.

“The Young Marines (program) promotes the mental, physical, and moral development of young men and women ages 8 to 18 by teaching them leadership, teamwork, and self-discipline,” said Borkowski. With decades of military service in the U.S. Army, including a deployment to Afghanistan, he also comes with 26 years teaching in public and private schools.

Although the program adheres to the U.S. Marine Corps’ structure, values and traditions, it is not a formal pathway to military service and does not include combat strategy or training with weapons.

“The Young Marines is first and foremost a youth leadership program,” Borkowski explained, noting that members are expected to meet certain standards. Members must meet basic physical fitness requirement and are tested regularly to earn points which help them advance into higher leadership positions.

“Passing the physical fitness test is a requirement for promotion,” said Borkowski. “The test is designed to be challenging, though one member in my unit already scored a perfect 500.”

Members are also expected to earn at least 50 community service hours per year. So far, the Epiphany group has accumulated these hours on an individual and group basis such as serving at Mass, picking up trash at local beaches and directing spectators at the Florida International Airshow in Punta Gorda.

Like most military-oriented programs, Young Marines must maintain grooming and uniform standards. The shared, sharp image among members helps instill respect and confidence both within and outside the unit.

“Enforcing standards is more than just demonstrating discipline,” said Borkowski. “It also shows a level of pride that may entice families to enroll their children at the school.”

Epiphany Cathedral Catholic School is the first Catholic school in Florida with a Young Marines program.