The Catholic Jewish Dialogue of Collier County is honored to present Rabbi Abraham Skorka, the “Pope’s Rabbi,” for a talk about his ongoing 25-year friendship with Pope Francis. 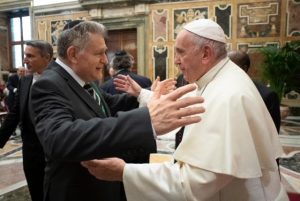 All are invited to attend the program which is co-sponsored by the Diocese of Venice and Jewish Federation of Greater Naples. The presentation will take place at 3 p.m. Sunday, April 3, 2022, in the ballroom of St. John the Evangelist Parish, 625 111th Ave. N., Naples. Doors open at 2:30 p.m.

Rabbi Skorka will describe his 25-year “deep and sincere friendship” with Pope Francis, dating to when then-Auxiliary Bishop Jorge Bergoglio was elevated and appointed as Archbishop of Buenos Aires. At the time of their first meeting, Rabbi Skorka was the leading Rabbi in Argentina as Rector of the Seminario Rabínico Latinoamericano (Latin American Rabbinical Seminary, in Buenos Aires.

The friendship, which continues to this day, began a dialogue that became an important component of both their personal lives and responsibilities as clergy. They collaborated in writing a book and engaged in 31 television discussions.

According to Rabbi Skorka, “Our personal dialogues had taken on the mission of spreading a culture of dialogue throughout society in as many ways as possible.”

In an interview with Richard Price of the Catholic Jewish-Dialogue of Collier County, Rabbi Skorka shared how he and the future Pope began their lasting friendship.

“In the beginning, there were differences between our ages and positions,” the Rabbi said. “My title as Seminary Rector was hardly on a par with the Archbishop of one of the most important Catholic communities in the world. It was he who overcame this disparity by unreservedly opening himself up to me. He paved the way. We not only began to dialogue but, most importantly, we began to work to spread the practice of dialogue in all aspects of our lives and responsibilities.”

A turning point in the friendship and ongoing dialogue occurred in 2004, when Rabbi Skorka invited then-Cardinal Bergoglio to deliver a message to his synagogue community, in anticipation of the day of Rosh Hashanah. 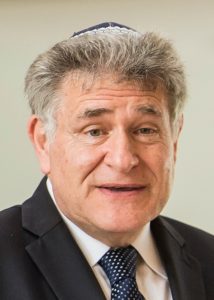 “His message to my synagogue in 2004 went on to develop the idea of the encounter between the individual and God, and of the importance of memory in that relationship. He alluded to the essence of Jewish belief expressed during this most holy season, the Days of Awe: to believe in the Creator who relates to each person and remembers each individual. In fact, I was astonished to hear this sermon. (His) message on this occasion could well have been the reflections of a Rabbi to his community.”

The Rabbi went on to say that Pope Francis has a profound ability to identify with the Jewish experience. This was evident in his instinctive understanding from the very beginning that dialogue between Catholics and Jews would become untenable if Catholics harbored any thought of “converting” Jews to Jesus Christ.

“As he would say years later as Pope Francis, ‘There was a basis of total trust [between us], because we knew in our conversations—and I want to highlight this—neither of us negotiated our own identity. If we had, we would not have been able to talk. It would have been a sham. … Neither of us attempted to convert the other.’ I cannot overstate the importance of this sensitivity, which is a pre-condition for the mutually enriching dialogue that he and I experienced,” Rabbi Skorka concluded.

For those interested in hearing more of this story, please consider attending the Catholic-Jewish Dialogue of Collier County presentation of Rabbi Skorka on 3 p.m. Sunday, April 3, 2022, in the ballroom of St. John the Evangelist Parish. Tickets are $18 in advance and are available by visiting https://jfgn.regfox.com/rabbi-skorka. Note: if seats are available on the day of the program, tickets will be sold at the door for $25.