A Prayer Chain Against Racism seeking to affirm the equality and dignity of every human person was held in Naples on June 28, 2020. The Prayer Chain was sponsored by the Catholic Parishes of Naples and brought out many on a steamy afternoon.

There were no talks or speeches, as people of all ages gathered to pray while seeking an end to racism in America as well as calling for peace and unity for all, as more than 100 people, including several area priests, participated.

The gathering was held on the west side of Tamiami Trail North (US 41) from Pine Ridge Road (near St. William Parish) as participants spread out to maintain social distancing southward more than a ¼ mile as they held up signs or prayed the rosary.

Signs provided by St. Elizabeth Seton Parish included: “RACISM is a SIN against HUMANITY,” “If You Want PEACE work for JUSTICE” and “ALL Colors in the Image of GOD,” which featured an image of four hands of different colors held together to form a strong bond.

Vehicles passing by honked their horns in support. Some who were stopped at the nearby traffic light asked why everyone was there. “We want to end racism!” one woman shouted back. “We are praying for God’s love to heal the world!” another said. Still another added: “We are all God’s children!” 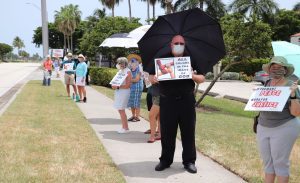 A Statement of Purpose was created for the Prayer Chain, which begins: “We Catholics of Collier County are standing by the roadside on June 28 in silent witness to the reality of racism in our country and, as people of Faith, to witness to the equality and dignity of every human person. We pray that God will transform the hearts of all people in our nation, including our own hearts, to see every human person as a brother and sister of inestimable worth.”

Pope Francis spoke following the Memorial Day murder of George Floyd in Minneapolis, Minnesota and the resulting social unrest in the U.S. and worldwide, condemning the death and calling for an end to racism.

In a June 9, 2020 letter to the Faithful from Bishop Frank J. Dewane about racism and social unrest, he stated: “The Church, Her leaders and the Faithful have an important role in confronting the sin of racism… Responding to the call to defend human dignity, the Church must raise Her voice against every instance of the evil of racism. I add my voice and condemn racism in all its forms.”

Mary, friend and mother to all, through your Son, God has found a way to unite himself to every human being, called to be one people, sisters and brothers to each other.

We ask for your help in calling on your Son, seeking forgiveness for the times when we have failed to love and respect one another.

We ask for your help in obtaining from your Son the grace we need to overcome the evil of racism and to build a just society. We ask for your help in following your Son, so that prejudice and animosity will no longer infect our minds or hearts but will be replaced with a love that respects the dignity of each person.

Mother of the Church, the Spirit of your Son Jesus warms our hearts: pray for us. Amen.