The Chrism Mass, a Holy Week tradition when Holy Oils are blessed and consecrated and priests from across the Diocese stand united with the Bishop, took on a different form this year but the significance and meaning of what took place were not diminished. 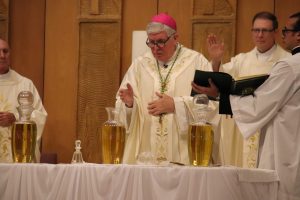 Bishop Frank J. Dewane, joined by priests representing each of the four Deaneries of the Diocese of Venice, celebrated the Chrism Mass on April 7, 2020, at Epiphany Cathedral in Venice. To accommodate the latest guidance on social distancing and limiting the size of gatherings, present on the altar were the Bishop, five priests and three permanent deacons.

“Nothing can stand in the way of the celebration of the Word of God,” Bishop Dewane said at the start of the Mass. “I am grateful that we have the opportunity for the priests and the lay faithful to tune in and witness this celebration. The oils that are blessed and consecrated during this Mass are not only for us priests to use when conveying the Sacraments, they are for you, the faithful.”

Held during Holy Week each year, the Chrism Mass would typically bring together the entire Presbyterate (all active priests in the Diocese) and would be witnessed by more than 1,000. Present for the Mass would be religious, deacons, student representatives from each of the 15 Diocesan Catholic schools, Knights of Columbus Color Corps and Knights and Dames of the Order of Malta as well as the Equestrian Order of the Holy Sepulcher. 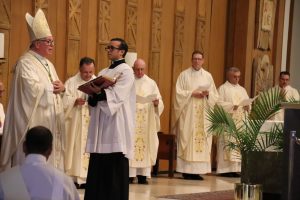 While no one was able to be present in person as witnesses to the Mass, Bishop Dewane said the Word of God and the Word made flesh in Jesus Christ, together, unite us whether everyone is together in person or remotely.

During the Renewal of Priestly Promises the representative priests stood as one, and spoke with one voice saying, “I am,” three times in response to questions asked by Bishop Dewane. These same questions were asked of them during their Ordination to the Priesthood. 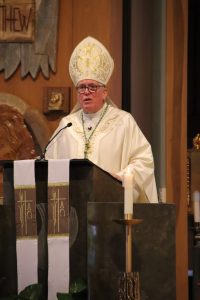 Bishop Dewane publicly thanked the priests for their continued service to the People of God throughout the Diocese of Venice for what they do each day, and in particular during the ongoing response to the pandemic. “I miss very much your presence here today… However, when we do gather, the Word of Lord is there… the words that have been said and heard today have great meaning for us.”

While addressing the priests directly, Bishop Dewane cited the readings of the day from the Prophet Isaiah, Book of Revelations, and the Gospel of Luke, which identify those who are called to be priests.

The first reading states that those who “shall be named priests of the Lord, ministers of God, you shall be called.” “The operative word being named,” Bishop Dewane said. “This is profoundly a part of our vocation. The idea of being named is also found in the Prophet Jerimiah 1:5 which states, ‘Before I formed you in the womb, I knew you, before you were born, I dedicated you a prophet to the nations I appointed you.’”

From the second reading from the Book of Revelation, the idea of who has been made or created who has made us into a kingdom of priests. The operative word there is made – the idea of being created.

Finally, the Bishop continued, the Gospel of Luke, where the idea of you and I being sent has a special meaning, He has sent me – the operative word being sent.

Bishop Dewane said to the priests: “The idea of being made is something that is truly ongoing, a work in progress. The strength of Christ is given to you and it has made your identity as a priest. It makes you new in the Lord, over and over again.”

As part of being called to the priesthood, Bishop Dewane said the priests are sent to follow where the Lord leads them, and to go forth humbly, joyfully and prayerfully. 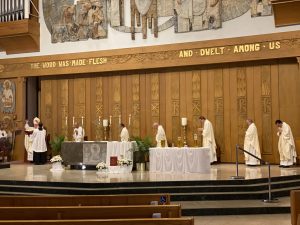 “You are sent by the Lord through every Eucharist you celebrate; sermon you preach, truth that you teach; child or adult you baptize; confession you hear; sinner you absolve; marriage you witness; dying person you prepare for their last journey – each one of you have been sent to continue on this priestly journey.”

In an appeal to the faithful, Bishop Dewane asked them to assist the priests, not just during this difficult time caused by the pandemic, but during all times and all difficulties. “We, as a body of priests, need to be uplifted.”

As noted at the beginning of his homily, Bishop Dewane concluded by reminding the priests that it is the Word of God that carries with intention, a meaning and a purpose for them and for the people of God entrusted to their care. “Know, as the faithful, they trust you, they need you, they love you, and so do I. May God bless you all.”

From Jerusalem to Rome, and to Dioceses around the world, Pope Francis and local Bishops carry out the annual Chrism Mass, which is celebrated during Holy Week, on or before Holy Thursday. In the Diocese of Venice, the Chrism Mass is traditionally celebrated on the Tuesday of Holy Week to accommodate the priests who need to travel great distances. This year was no different.

The Chrism Mass takes its name from the Sacred Chrism Oil, the most eminent of the holy oils, which the Bishop blesses and consecrates for use by Parish priests of the Diocese.

The Order of the Blessing of the oils and consecration of the Sacred Chrism takes place at different times during the Mass. Vested in white, Bishop Dewane, raised hands over the urns on a table near the altar and first blessed the Oil of the Sick at the conclusion of the Eucharistic Prayer. Following the Prayer After Communion, the Bishop blessed the Oil of the Catechumens.

Before the final blessing, the final portion is the consecration of the Sacred Chrism Oil. First balsam is poured into the oil and then mixed. The balsam is added so that it gives the oil a sweet smell intended to remind those who encounter it of the “odor of sanctity.” All of the faithful are called to strive for sanctity. The Bishop then extended his hands toward the vessel containing the oils, and at one point asked the priests to raise their right arm in prayer, and said the prayer of consecration. The celebration is brought to a close with a final blessing.

The Oil of the Sick is used for those who seek anointing, and the Oil of the Catechumens, which is imposed on those preparing for baptism, are simply “blessed,” by the Bishop, while the Sacred Chrism is “consecrated.”