The Diocese of Venice Yom HaShoah – Hour of Remembrance, honoring the victims of the Holocaust, is an annual interreligious gathering which brings together members of the Catholic and Jewish communities to recommit to the promotion of peace and solidarity among all peoples. This gathering commemorates the lives and heroism of the Jewish people who were slaughtered by the Nazis between 1933 and 1945.

This year’s commemoration, scheduled for April 26, 2020, has been cancelled due to the coronavirus pandemic. This will not diminish painful memories for two Sarasota residents.

Helga Melmed, 93, of Sarasota, says her younger years in Berlin, Germany, were a happy time, until the age of five when her life started to change. She recalls her public-school teacher beating her knuckles until they were bleeding and then encouraging the whole class to call her a “dirty Jew”.

“It was very difficult for my mother to explain to me why I was being treated this way,” says Melmed, from her Sarasota home, surrounded by photos and memories of what might seem to be someone else’s life. “I was clean, I had a bath, and was wearing pretty clothes.” 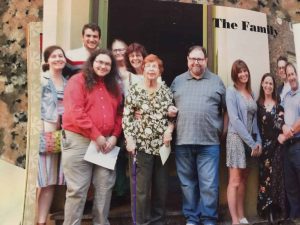 Laws were being created regulating what Jewish people could and could not do, and her mother tried to protect her from these changes.

“I would come home from school and her wedding silver would be gone, or the radio wouldn’t be there. My mother would just say she didn’t want to polish the silver anymore, or the radio was broken,” Melmed said. The Nazis were ordering Jewish families to return items to certain locations while the children were in school.

In 1938, at the age of 10, her private Jewish school was set on fire as all the children watched their books being thrown into the flames. Melmed says the children stood around holding each other crying, not understanding what was going on.

Life would change very quickly following the school fire. Her father, who worked as a bank executive was put out of work, and the family’s bank account was taken over by the Nazis, forcing the family into poverty.

“In the middle of the night, on Oct. 16, 1938, the Nazis came and said we are resettling you to a better place,” recalls Melmed. “What could be better than your own home where you were born and lived in forever?”

They had 20 minutes to evacuate the house. Many families were taken to an old warehouse, which turned out to be a slaughterhouse.

They stayed at the slaughterhouse for a day or two, before being put in cattle cars with hundreds of families packed in like ‘sardines’ with a waste bucket in the center of the car. Melmed says it wasn’t long before the bucket spilled over suffocating all in the foul smell and sludge. Many became weak and some died on that journey with an unknown destination.

Eventually the train stopped in the Łódź Ghetto in Poland, where thousands of Jews were left with little food, shanty houses and a fend-for-yourself mentality.

“We were not welcome by the other Jews there because the language was different and the people were already starving,” said Melmed, whose family would find a shack to call home with straw mats and two bunk beds nailed together, and a few food ration cards.

One day, when Melmed was 12-years old, her father was killed after the Nazi’s used many men for target practice. The men were made to run around the marketplace while being shot at by the Nazi’s. Her father was dragged home and dropped on the doorstep dead.

“Mother was heartbroken, and she started to get very sick and couldn’t work,” recalls Melmed, who cared for her before and after work. “She would often give me her food because she said she couldn’t eat. I still feel guilty about that today.”

“On my 14th Birthday my mom, who was still very sick, told me she had a birthday present for me. She handed me an onion,” smiled Melmed, the memory still bringing tears.

The meals the family had been eating consisted of potato peels and coffee grounds fried in mineral oil. A desperate wish of Melmed was to have an onion to add taste to the meal. Her wish was granted. That night, her mother went to bed, and died.

Alone for months, Melmed was working in the factory sewing buttons on uniforms when a Polish-Jewish man came by and wanted to adopt four boys and four girls, so as to offer them a better life.

“We all became a family – I worked 12 hours a day sewing ladies’ undergarments, which was better than buttons, and we had plenty of food,” Melmed said.

The peaceful time ended in 1942 when the Nazi’s, who were trying to stay ahead of the Russian forces, emptied the ghettos and took all to Auschwitz, the now infamous concentration camp. Melmed, and the other girls, would never see the four boys again.

Towards the end of the war, 17-year old Melmed was only 46 pounds when she was set free. 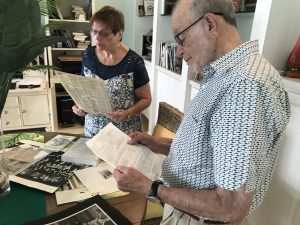 In 1942, halfway around the world in Chicago, then 17-year old Arthur Sheridan was realizing that engineering school was not for him, so he decided to join the U.S. Army.  Sheridan, who wanted to fly, would go through basic training at Fort Benning, Georgia, and much to his dismay would score high on an engineering test which led to him attending Indiana University for the U.S. Army Specialized Training Corps.

“When we arrived, the first thing we asked was how much KP (Kitchen Patrol) duty will we have?” said Sheridan, 94, from his home in Sarasota. “We were told none – then we asked how much guard duty do we have? We were told none, you just have to go to school, which is what I was trying to avoid!”

Sheridan trained as a sniper and scout with the 20th Armored Division in Fort Campbell, Kentucky, and was eventually shipped to Europe, landing at La Havre, France.

“When our equipment arrived, we went across the Rhine and into Germany, with many skirmishes along the way, which I don’t like to talk about because of the death and dying,” said Sheridan. “Our troops all did what they were supposed to do – I hope you understand what that means.”

The Armored Division was later instructed to support the 45th and 42nd Infantry divisions in taking Munich. On the way, Sheridan and the soldiers came across a railroad track, on the outskirts of Dachau, with 39 boxcars full of dead bodies.

“We would learn later these were concentration camp people who had been moved from Poland eastward so the Russians wouldn’t get them,” Sheridan said.

The troops went through the train to see if anyone was alive. Sheridan says he only learned recently that there may have been one person who survived.

“At the time we knew nothing of concentration camps – this is an important issue,” he said. “We knew about Nazis, atrocities and Hitler, but not these camps.”

The troops arrived at the Dachau Concentration Camp to find thousands of people hanging on a fence, after the Nazi guards had fled, or were captured.

“I am Jewish and speak a little Yiddish, so I understood a bit of what they were saying,” said Sheridan. “We went through the camp to find emaciated people, some so sick they could not get out of the barracks. We saw the gas chambers.”

Before returning to the United States, Sheridan’s Division was sent to Berchtesgaden, in the Bavarian Alps, where he saw the bombed ruins of one of Hitler’s vacation homes.

As irony would have it, both Art Sheridan and Helga Melmed each live in Sarasota and speak often at Holocaust Museums around the country. They have met a few times and hold an enormous amount of respect for each other.

The Diocese of Venice regrets the Coronavirus Pandemic has forced the cancellation of Yom HaShoah this year and is committed to continuing the effort to keep the memory of the Holocaust and keep to the vow that “We will never forget.”