In a public response to a “call to holiness,” Transitional Deacons Christian Chami, David Portorreal and Michael Young were ordained to the priesthood by Bishop Frank J. Dewane on July 16, 2022, at Epiphany Cathedral in Venice as more than 700 people rejoiced. 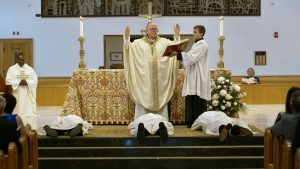 The poignant and emotional Rite places Fathers Chami, Portorreal and Young in a new rank as they are raised to the Order of the Presbyterate where they will now celebrate the Holy Sacrifice of the Mass, confer the Sacraments and teach the Gospel.

Bishop Dewane congratulated the ordinandi for answering this particular call to holiness and advancing in their formation through prayer, discernment, guidance and direction. This helped them grow closer to the Lord while at the same time reminded each they are called to reflect and magnify Christ and bring others closer to the Lord.

Through the Sacrament of Holy Orders, a priest is transformed and marked indelibly as an instrument through which others receive the Sacraments, Bishop Dewane added. It is through ordination that Chami, Portorreal and Young have a new beginning, configured to Christ, the Eternal High Priest. 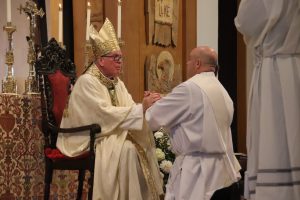 “Holiness has to be the greatest gift you developed within your relationship with Jesus Christ – you took it into the seminary, and you bring that out to be here today,” the Bishop said. “It is your holiness that will be supported by your daily prayer life… Let that holiness be present always in your life… Let it be a mark of who you are as an example for others.”

Bishop Dewane concluded his remarks by encouraging all the faithful present to pray for Fathers Chami, Portorreal and Young, and for all of the priests and religious in the Diocese as they continue on their spiritual journey in response to the Lord in a particular way.

“Hold them up to the Lord; asking for the graces that they need,” Bishop Dewane concluded. “Three men come forward today as an example, not just of a priest but of the whole community. Continue to lift them up and support them as they journey to be the men of God they have answered the call to be.” 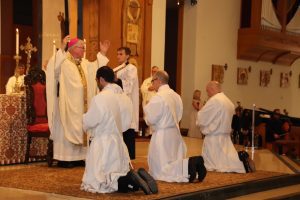 When the Rite of Ordination began, the elect were called forth by Father Shawn Roser, Diocesan Vocations Director, and upon hearing their names, each stood and answered “Present.” After the homily, individually, the ordinandi knelt before the Bishop so as to promise respect and obedience to him and his successors. They then prostrated before the altar for the Litany of Supplication/Litany of Saints. The whole assembly joined in the prayer which invoked the intercession of the Saints in heaven. 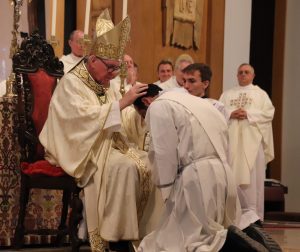 The Bishop then laid his hands on the head of each man and prayed silently. All of the priests present followed to participate in this part of the Rite. Next was the Prayer of Ordination. These combine to form an essential part of the Liturgy of the Sacrament of Holy Orders.

The newly ordained priests were then vested in the stole and chasuble, vestments which are worn when celebrating the Eucharist and symbolize their responsibility and authority in service to Christ, their role among the faithful. 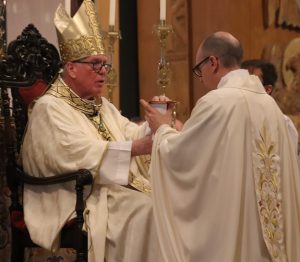 The palms of the new priests were then anointed with the Sacred Chrism by Bishop Dewane, the sign of the special anointing of the Holy Spirit who will make their ministry fruitful. Next, the Bishop presented each new priest with the chalice (wine) and paten (bread) which they are called to present to God in the Eucharistic sacrifice saying: “Receive the oblation of the holy people, to be offered to God. Understand what you do, imitate what you celebrate, and conform your life to the mystery of the Lord’s Cross.” He repeated this commission, once each for the newly ordained priests.

The Rite of Ordination ended with the Bishop giving a fraternal kiss of peace to each newly ordained priest, welcoming them into the Diocesan Presbyterate or priesthood. The priests present then followed the Bishop’s example. The newly ordained then joined Bishop Dewane at the altar.

The Liturgy of the Eucharist followed. The new priests joined all the priests for the first time in concelebrating the Eucharist with Bishop Dewane, reciting together the words of Consecration. For the first time, they offered the Holy Sacrifice of the Mass, acting in the person of Christ. From this sacrifice their whole priestly ministry will draw its strength. 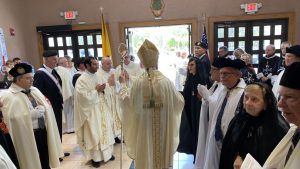 During the ordination, Deacons Chami, Portorreal and Young freely presented themselves to serve God, the Church and the Bishop of the Diocese of Venice, and his successors. They also made a promise to celibacy and a promise to obedience. The reward for that choice is to serve the people of God.

The newly ordained responded to a particular call in their lives and evidenced their response in a profound way by coming forward for ordination. The three men reflected afterwards about the powerful moment that brought about an inner calm. They also expressed the genuine joy and love for the Lord they each witness.

Also in attendance was a large group from St. William Parish in Naples where the families of Fathers Chami and Portorreal attend Mass. Both men celebrated their first Mass of Thanksgiving at St. William on July 17.

The Ordination Mass was followed by a reception in the Cathedral Parish Hall where the newly ordained priests were available to greet the public and impart their priestly blessings on them.

Bios of the new priests 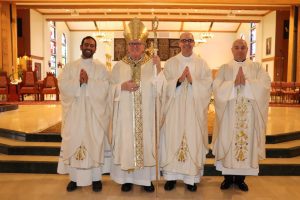 Father Chami, 28, was born in Montreal, Canada, but raised in Naples, Fla. since the age of 4, and was an accomplished swimmer in high school and is a longtime parishioner of St. William Parish in Naples. He first seriously heard the call to the priesthood while at Florida State University. Since joining the Diocese as a seminarian, Deacon Chami graduated from St. John Vianney College Seminary in Miami and then studied at the Pontifical North American College in Rome. Within the Diocese, he has served pastoral assignments at St. Leo the Great Parish in Bonita Springs, Incarnation Parish in Sarasota, Sts. Peter and Paul the Apostles Parish in Bradenton, and St. Francis Xavier Parish in Fort Myers. Father has been appointed as Parochial Vicar of Holy Cross Parish in Palmetto, effective July 18 until September 30. Father then returns to Rome to complete his Licentiate Studies at the Pontifical Atheneum of St. Anselm.

Father Portorreal, 51, grew up in Northeast Ohio and graduated from the College of the Holy Cross in Worcester, Massachusetts, before entering film school at Florida State University and then moving to Los Angeles to break into the film industry. However, the seeds of a priestly vocation were planted as early as grade school and Deacon Portorreal began his discernment with the Archdiocese of Los Angeles at St. John Seminary in Camarilla, California. But his parents are retired in Naples, so he eventually transferred to become a seminarian within the Diocese of Venice. As a seminarian, Deacon Portorreal graduated from St. Vincent de Paul regional Seminary in Boynton Beach and had pastoral assignments at St. William Parish in Naples and St. Leo the Great Parish in Bonita Springs. Effective July 18, Father has been appointed as Parochial Vicar of St. Leo the Great Parish in Bonita Springs.

Father Young, 56, was born in Atlanta, Georgia and grew up in Mississippi before settling in North Carolina. He too heard the call to the priesthood from a young age, but also pushed it to the back of his mind when he joined the U.S. Navy and served for four years, then became a law enforcement officer and special/enforcement agent. He later worked as a reentry program case manager for men and women transitioning from the Federal Bureau of Prisons back into society. He described his calling to the priesthood as a series of moments when he received reinforcement to move forward, first with a career and then to a life in service to the Lord. Deacon Young earned a degree from John Wesley College in North Carolina and was a member of a religious community who then transitioned to the Diocese of Venice. He recently graduated from Pope St. John XXIII National Seminary in Weston, Massachusetts, which caters to second-career vocations. Within the Diocese of Venice, he served pastoral summer assignments at Incarnation Parish in Sarasota and Our Lady of Lourdes Parish in Venice. Father’s first Mass was celebrated at Our Lady of Lourdes, and effective July 18, he has been appointed as Parochial Vicar of St. John XXIII Parish in Fort Myers.