The annual Chrism Mass is a time during Holy Week when the sacred oils used for the Sacraments throughout the year are blessed and consecrated and the priests of the Diocese of Venice gather united under one Bishop. The Mass is also an appropriate time to recognize priests who are celebrating significant milestones in their priesthood.

While the Chrism Mass was celebrated on Tuesday, April 7 of Holy Week in a modified form due to crowd restrictions brought on as a precaution against the pandemic – with Bishop Frank J. Dewane and representative priests from each of the four Deaneries in the Diocese – the five priest jubilarians were recognized, if not actually present.

The priests have 200 years of combined experience amongst them, with three marking their Golden Jubilee and two their Silver Jubilee.

While they were not present at the Chrism Mass, they must still be recognized for reaching such important milestones. The Golden Jubilarians are Msgr. Philip W. Hill, Msgr. Frank C. McGrath and Father James P. Meyers. The Silver Jubilarians are Father Marcial Y. Garcia and Father Antony T. Lukka. See their complete biographies below. 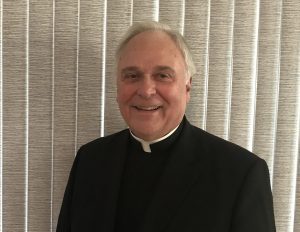 Msgr. Philip W. Hill was born in 1945 in Grand Island, Nebraska, and earned degrees from Cathedral College in New York City, New York; St. Joseph Seminary, Yonkers, N.Y.; Gregorian University and Lateran University in Rome, and Fordham University School of Law, the Bronx, N.Y. Msgr. Hill was ordained Dec. 18, 1970 at St. Peter’s Basilica, Rome. As a priest for the Archdiocese of New York, he served at parishes in Scarsdale and Poughkeepsie, as well as vice-official for the Metropolitan Tribunal. Msgr. Hill also served as a U.S. Army Chaplain working at the Pentagon Army Chief of Chaplains Office during the Sept. 11, 2001 terror attacks, as well as at posts in Iraq, Afghanistan and Kuwait. His most recent assignment in the Army was as Command Chaplain at Fort Belvoir in Virginia before retiring as a colonel. Msgr. Hill came to the Diocese of Venice in October 2019, first assisting at Our Lady of the Angels Parish in Lakewood Ranch and since January 2020 assisting at Sacred Heart Parish in Punta Gorda.

Father James P. Meyers was born in 1944 in Omaha, Nebraska, and discerned his vocation to the priesthood while studying at Mt. Michael Abby, Elkhorn, Nebraska, and went on to study at Conception Seminary in Conception, Missouri, and Theological College of Catholic University, Washington, D.C. Father Meyers was ordained on May 30, 1970 in Omaha for the Archdiocese of Washington. He served at parishes in Washington. D.C., as well as in Silver Springs, Bethesda, Leonardtown and Rockville in Maryland. For the Archdiocese he also served on the Priest Council and as Dean. In the Diocese of Venice, has assisted at St. Leo the Great Parish in Bonita Springs. 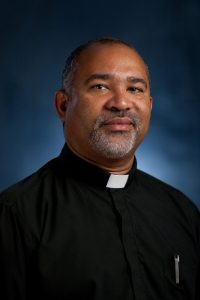 Father Marcial Y. Garcia was born in 1963, in Bani, Dominican Republic, the oldest of 12 children. He studied at St. Thomas Aquinas Major Seminary in Santo Domingo, and was ordained June 3, 1995, in Bani. He served at parishes in Santo Domingo and San Cristobal until 2001. Father Garcia joined the Diocese of Venice in 2001 first serving at St. Margaret Parish in Clewiston from 2001-2011, and then at Holy Cross Parish in Palmetto from 2011-2013. He was then priest-in-charge of Hispanic Ministry at St. Elizabeth Seton and St. Agnes Parishes in Naples in 2013, then at St. James and Santiago Mission in Lake Placid. He is the current Pastor of St. Joseph the Worker Parish in Moore Haven and St. Theresa of the Child Jesus Mission in Okeechobee.

Father Antony T. Lukka was born in 1965 in Kanjirapally, Kerala, India, the eighth of nine children. Father earned degrees from Gandhi University in Kerala, and discerned a vocation to the priesthood at Papal Seminary in Pune, India. He was ordained May 30, 1995 for the Diocese of Kanjirapally, and served at parishes in Koruthode, Anakkal, Karikkattoor and Enamely, and also as assistant principal then principal at a junior college in Anakkal. He came to the Diocese of Marquette, Michigan, in 2001 serving at parishes in Assinis, Cooks and Merenisco, Michigan, as well as assisting in prisons, nursing homes and hospitals. For the Diocese of Marquette, he served as a member of the Presbyteral Council and College of Consultors. Father Lukka came to the Diocese of Venice in 2016 and is a Parochial Vicar at St, William Parish in Naples.