The most recent U.S. Conference of Catholic Bishop’s General Assembly in Baltimore marked the end of a three-year term for Bishop Frank J. Dewane as chair of the Conference Committee on Domestic Justice and Human Development, but not before calling for an end to gun violence and encouraging civility in voters. 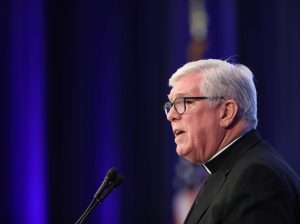 During that span, Bishop Dewane spoke on behalf of the U.S. Conference on issues of health care, human dignity, human rights, development, poverty and justice.

Bishop Dewane was elected to the post in 2015 and served as chairman-elect before taking the chair in November 2016. In three years as chair, the Bishop advocated on behalf of the faithful by sending letters to President Trump and to the U.S. Senate and House of Representatives, as well as personally lobbying the Senate and House. In addition, he made more than 100 statements on a variety of issues and was interviewed by a variety of news outlets.

During a Nov. 11 presentation the General Assembly, Bishop Dewane said Catholic clergy and lay leaders can play a role in bringing together people to build understanding of the need for sensible policies that can end the scourge of gun violence. Sadly, just a few days after the presentation, a school shooting in California left two dead and others wounded.

Outlining the USCCB’s long-held stance of the need for “common sense” legislation that governs the availability of guns, the Bishop also pointed to the need to address gun violence, which has ravaged many urban centers, while acknowledging the legitimate concerns among responsible gun owners of losing access to firearms for hunting or, in some cases, protection.

In 1975, the USCCB issued its first major statement on guns and have since addressed gun violence, outlining the Conference’s concern that lives are being needlessly lost because of the widening availability of guns, including military-style weapons. However, the latest call goes beyond legislative efforts and appears to open the door for Church leaders to seek a common ground in addressing gun violence.

“Human life is sacred … and we need to approach this with the full strength of our teaching,” Bishop Dewane said.

The USCCB is not seeking a total limit to handguns but would welcome broader background checks and some limits on gun ownership. While common sense restrictions on guns would be no different than those already in place on prescription drugs and drivers. The Bishop suggested the restrictions are not the full solution.

“Such regulations are helpful, but they will not ban gun violence completely. For that to happen, we need new ways of thinking,” he continued.

Bishop Dewane also urged society to look at the “danger signs in others that can lead to the loss of empathy (and see) early signs of self-inwardness… As a society we have become less and less empathetic ourselves, a clear sign that we all are, to a degree, becoming dangerous.”

During the General Assembly, the Bishops approved adding new materials to complement “Forming Consciences for Faithful Citizenship,” which is a voting reference from the committee Bishop chaired, and a long-standing guide to help Catholics form their consciences in public life, including voting.

A new year-long initiative invites Catholics to model civility, love for neighbor, and respectful dialogue. The program, “Civilize It: Dignity Beyond the Debate” asks Catholics to commit to civility, clarity, and compassion in their families, communities, and parishes, and call on others to do the same. (A link to the pledge is available on the Diocese of Venice website www.dioceseofvenice.org.)

Bishop Dewane emphasized the importance of “Civilize It” in the context of the current divisive climate: “Conversation in the public square is all too often filled with personal attacks and words that assume the worst about those with whom we disagree. We are in need of healing in our families, communities, and country. “Civilize It: Dignity Beyond the Debate” is a call for Catholics to honor the human dignity of each person they encounter, whether it is online, at the dinner table, or in the pews next to them. I invite all Catholics to participate in “Civilize It.” In doing so, they can bear witness to a better way, approach conversations with civility, clarity, and compassion, and invite others to do the same.”

At the conclusion of the General Assembly Bishop Dewane handed over the leadership of the Committee to Archbishop Paul S. Coakley of Oklahoma City.