Speaking as the chairman of the U.S. Conference of Catholic Bishops’ Committee on Domestic Justice and Human Development, Bishop Dewane was part of a roundtable discussion about capital punishment on Oct. 10, the World Day Against the Death Penalty. 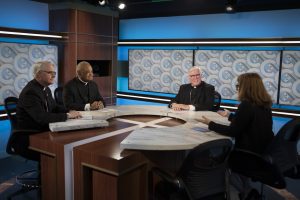 The discussion highlighted not only the consistency of church teaching against capital punishment but also what Catholics could do to learn more about what the Catholic Church has to say on this issue.

Bishop Dewane stressed the sacredness of human life and said that “when it is violated, when it is attacked,” we are called to step in and “become the voice for those who can’t speak” for their own lives.

The Catholic Church’s opposition to the death penalty stems from its view on the sacredness of human life and the value of mercy.

The bishops spoke about the many problems with the death penalty. Examples cited were cases where minorities were not given a jury of their peers or when DNA results have exonerated death-row prisoners. Bishop Dewane mentioned that many on death row include people of color or those in poverty or suffering from mental illness. He said society needs to look at these factors and consider not just punitive but restorative measures.

The bishops were asked about Catholic opinion of the death penalty — 53% are in favor of it, according to a 2018 Pew Research Center poll. It was agreed by the panelists that it’s important for the faithful to learn, study, and read the Teachings of the Magisterium of the Church on this issue.

From St. John Paul II, Pope Benedict and Pope Francis there has been a steady movement toward a greater clarity in terms of the morality and the inadmissibility of the death penalty.

Panelists were disturbed by the announcement this summer that the federal government rescinded its 16-year moratorium on executing federal inmates.

When talking about the families of victims the bishops agreed that the only thing that can bring healing or comfort is “mercy: being willing to forgive.”

In another pro-life initiative, on Oct. 15, Bishop Dewane co-authored a news release from the USCCB responding to a National Council on Disabilities (NCD) federal study revealing that assisted suicide laws are dangerous to people with disabilities.

In its report, “The Danger of Assisted Suicide Laws,” NCD provides several policy recommendations including urging states to not legalize any form of assisted suicide or active euthanasia. The NCD is an independent federal agency charged with advising the president, Congress, and other federal agencies regarding policies, programs, practices, and procedures that affect people with disabilities.

Bishop Dewane, along with Archbishop Joseph F. Naumann, of Kansas City in Kansas, and Chairman of the USCCB Committee on Pro-Life Activities, praised the NCD for its “critical research and report exposing serious risks of abuse, coercion and discrimination posed by assisted suicide laws, specifically for people with disabilities.”

“Every suicide is a human tragedy, regardless of the age, incapacity, or social/economic status of the individual.,” the statement continues. “The legalization of doctor-assisted suicide separates people into two groups: those whose lives we want to protect and those whose deaths we encourage. This is completely unjust and seriously undermines equal protection under the law.”

The statement goes on to note the human rights and intrinsic worth of a person do not change with the onset of age, illness, or disability. As Pope Francis said, “True compassion does not marginalize anyone, nor does it humiliate and exclude – much less consider the disappearance of a person as a good thing.”

The bishops stated that all must do what they can to uphold the dignity of life, cherish the lives of all human beings, and work to prevent all suicides. “We urge state and federal governments, health care providers, and associations to heed this report’s warnings and recommendations, especially its opposition to assisted suicide laws,” the statement concluded.

Bishop Dewane has been chairman of the USCCB Committee on Domestic Justice and Human Development since 2016 and will be passing along the role to Archbishop Coakley during the Fall Meeting of the USCCB.