A Cape Coral couple with a passion for promoting a culture of life was honored with the 2020 Diocese Respect Life Volunteers of the Year at the 34th Annual Culture of Life Statewide Conference on Oct. 24, 2020 which was livestreamed from the Diocese of Palm Beach. 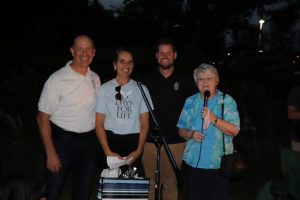 Rick and Paula Hellenbrand from St. Andrew Parish in Cape Coral organized the first 40 Days for Life fall campaign in Fort Myers in 2011 and have been leading the campaign ever since. This year marks their 10th fall campaign. The award was presented to the Hellenbrand’s at the opening Vigil of the 40 Days for Life Fall Campaign on Sept. 22, 2020, in lieu of a personal presentation at the Conference.

In her nomination of the Hellenbrands, Jeanne Berdeaux, Diocese of Venice Respect Life Director, wrote: “It’s amazing that they have been able to run successful campaigns every year while operating a successful real estate business. Rick has also served as his Knights of Columbus Council’s Culture of Life Chairman and Grand Knight. We thank them for their hard work and continued dedication to promoting a greater respect for all human life.”

The couple expressed their deep gratitude in being recognized by the Diocese of Venice as the recipients of this award.

“Managing the 40 Days for Life Fall campaign over the past 10 years has been fruitful in protecting the lives of the innocent children,” Rick Hellenbrand stated. “As husband and wife, parents and now grandparents, to serve in such a lifesaving capacity is its own reward. None of which is possible without the many pro-life warriors who are equally engaged on the sidewalks throughout the Diocese to do the same to defend life in its earliest stages. We are humbled and filled with gratitude to receive such an honor.” 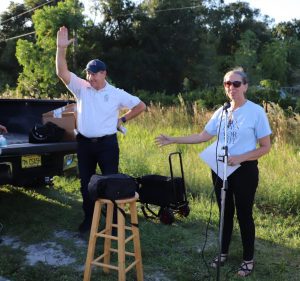 While the honor as Diocesan Volunteers of the Year was special for the couple, Rick Hellenbrand concluded by saying there is an ultimate goal to this effort. “It is with much appreciation that this award is received, and with hopes that the efforts of all volunteers together we will soon win this battle to end abortion forever.”