It was on the night of Nov. 9-10, 1938, when members of the Nazi party sponsored anti-Jewish riots (pogroms) which attacked Jewish persons and destroyed Jewish owned property in Germany and Austria. “Kristallnacht, the Night of Broken Glass” is regarded by historians as “the Night the Holocaust began” in Europe, which ultimately led to the murder of more than six million Jews. 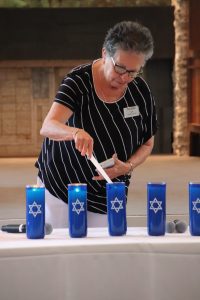 To remember those events, the Catholic-Jewish Dialogue of Collier County hosted its annual “Kristallnacht: The Night of Broken Glass” Nov. 5, 2022, at Temple Shalom in Naples. The event was co-sponsored by the Diocese of Venice and Jewish Federation of Greater Naples, GenShoah of SWFL, and the Holocaust Museum and Janet G. and Harvey D. Cohen Education Center.

On behalf of the Diocese, Bishop Frank J. Dewane said it is necessary to come together to remember Kristallnacht and the Holocaust which followed. But this year’s gathering was held in the context of a recent spate of anti-Semitic incidents including the placing of lawn signs in communities throughout Naples, Collier County and the entire Diocese of Venice.

“Unfortunately, we need to acknowledge this inhumane unchristian rebirth that we have evidenced in Southwest Florida – of anti-Semitism,” Bishop Dewane said.

The Bishop said Catholic and Jewish peoples have a common parentage which bond the two together. The coming together through the Dialogue allows for open discussion which ultimately prevents misunderstandings and mistrust, fostering a way for the two faiths to see each other with a deep amount of respect. 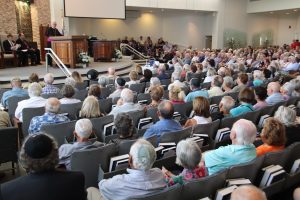 “Each one of us has a responsibility to take action when we see anti-Semitism,” Bishop Dewane continued. “It isn’t just for the Dialogue group to resolve. It isn’t just for a Parish or synagogue. It’s for all of us to come together when we see the negativity that can rears its head, just as it did so many years ago when Kristallnacht foreshadowed what the world never thought could happen (the Holocaust) – and it did happen. You and I have responsibilities to speak out and to speak up.”

The guest speaker was Dr. Suzanne Brown-Fleming, Director of the International Academics Programs Mandel Center for Advanced Holocaust Studies at the U.S. Holocaust Memorial Museum and her topic was “November 1938: Perspective from the Vatican Archives.”

In her talk, focused on the month following Kristallnacht, Brown-Fleming said a certain context was needed, reminding the audience that the groundbreaking 1965 Vatican II document Nostra Aetate (In Our Time), which redefined the relationship between the Church and other non-Christian faiths, was years away. Nostra Aetate importantly states that what happened in the Passion of Christ “cannot be charged against the Jews then alive, nor against the Jews today.”

Brown-Fleming cited several diplomatic and personal reports sent to and from the Vatican regarding Kristallnacht as well as correspondence from the faithful, who were almost all blatantly anti-Semitic, blaming the Jewish people for the death of Christ, and because of this, saw little reason to help the Jews in Germany or elsewhere.

In the end, Brown-Fleming said the Vatican was “not willing to aggressively condemn the Nazi action against the Jews, but only to authorize on behalf of the Pope a reminder of the Church of the mission to aid the suffering and the persecuted. It is quite an understatement to say this response in these troubling times was not enough.” She noted much has changed since Nostra Aetate.

A poignant moment during the annual commemoration was a candle lighting ceremony. Six candles were lit by Gen Shoah (second generation Holocaust survivors). Each lit their candle for the victims of the Holocaust and for a brighter future.

The Catholic-Jewish Dialogue of Collier County has been working together for 21 years with the purpose of engaging Catholics and Jews in understanding our past history and advancing the cause of mutual understanding and appreciation of our differences, as well as our commonalities.