The Communion of the priests of the Diocese of Venice was represented in all its unity during the annual Chrism Mass which was held on April 16 at Epiphany Cathedral in Venice. 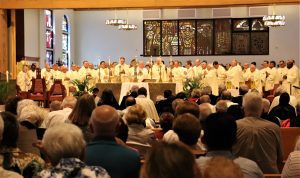 More than 120 priests gathered for this Holy Week tradition where the priests renew their priestly promises which they made at the time of their ordination. This celebration, which was witnessed by more than 1,200 of the faithful, including students from the Diocesan Catholic Schools, marks the institution of the priesthood by Christ and is an expression of unity of the priests with their Shepherd, the Bishop of the Diocese.

During the Chrism Mass, Bishop Frank J. Dewane also blessed and consecrated Holy Oils to be used in Parishes across the Diocese of Venice for the sacramental life of the Church throughout the coming year.

The Chrism Mass not only brings into focus the historical context of the priesthood but is also an opportunity for the priests to see the Church of the Diocese beyond their own Parishes and celebrates the distinctiveness of the priesthood. Having all the priests of the Diocese come together at the Chrism Mass, on the eve of the Easter Triduum, reminds priests of their calling to act in the person of Christ – In persona Christi. This is one of the few times that so many priests are gathered together for the Mass.

During the Renewal of Priestly Promises the gathered priests stood as one, and spoke with one voice saying, “I am,” three times in response to questions asked by Bishop Dewane. These same questions were asked of them during their Ordination to the Priesthood. 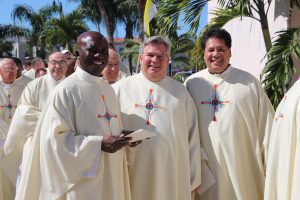 Bishop Dewane publicly thanked the priests for their continued service to the People of God throughout the Diocese of Venice for what they do each day. The call to service that priests respond to is a call to rise above the ways of the world – not that they are above anybody, but it is about serving with passion born from Christ, for the Lord and His people, and to bring them together.

In a world of increasing secularism, the is a greater need for this service than ever before, the Bishop acknowledged. While some may lose focus in this purpose, the service must always be redirected, a service toward others and living out their call to serve.

“The questions you must ask yourself are: Who can I serve? What can I do to serve? How best can I serve?” Bishop Dewane continued. “The mission of priest is about Jesus Christ; it is about His Church; it is about the People of God; and it is about living out our call in service to all.” 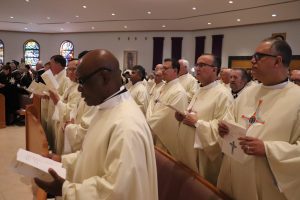 The two priests and two deacons serving or living in the Diocese celebrating the 25th and 50th anniversaries or their ordination were individually recognized by the Bishop for their years of service to Holy Mother Church.

While the Oil of the Sick and Oil of the Catechumens are blessed, the Sacred Chrism is consecrated; and each will be used at Parishes throughout the year in the administration of the Sacraments.

From Jerusalem to Rome, and to Dioceses around the world, Pope Francis and local Bishops carry out the annual Chrism Mass, which is celebrated on or before Holy Thursday. In the Diocese of Venice, the Chrism Mass is celebrated on the Tuesday of Holy Week to accommodate the priests who need to travel great distances.

The Chrism Mass takes its name from the Sacred Chrism Oil, the most eminent of the three holy oils which the Bishop consecrates for use by parishes of the Diocese. Bishop Dewane described the oils as “Oils of Gladness” which represent the indelible mark each bestows.

The blessing of the oils take place at different times during the Chrism Mass. Vested in white, Bishop Dewane, raised hands over the urns on a table near the altar and first blessed the Oil of the Sick at the conclusion of the Eucharistic Prayer. Following the Prayer After Communion, the Bishop blessed the Oil of the Catechumens.

Next, the final portion of the Rite is the consecration of the Sacred Chrism Oil. First balsam is poured into the oil and then mixed. The balsam is added so that it gives the oil a sweet smell intended to remind those who encounter it of the “odor of sanctity.” All of the faithful are called to strive for sanctity. The Bishop then breathes on the Sacred Chrism “to symbolize the Holy Spirit coming down.” The Bishop then extended his hands toward the vessel containing the oils and said the prayer of consecration. The Rite is brought to closure with a concluding prayer. 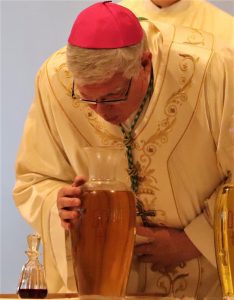 The Oil of the Sick is used for those who seek anointing, and the Oil of the Catechumens, which is imposed on those preparing for baptism, are simply “blessed,” by the Bishop. the Sacred Chrism is “consecrated.”

After Mass, the thee oils were divided up and given to each pastor to use in the Parish.

The newly blessed and consecrated Holy Oils from the Chrism Mass were first used for the Celebration of the Sacraments of Initiation during the Easter Vigil Liturgy on Holy Saturday. At that time, 268 catechumens and candidates entered fully into the Catholic Church at Parishes throughout the Diocese and receive one or all the following Sacraments: Baptism, Confirmation, Holy Eucharist – which some received for the first time.

A reception was held in the Parish Hall following the Mass to honor Priests and Deacons celebrating their jubilee in 2018. 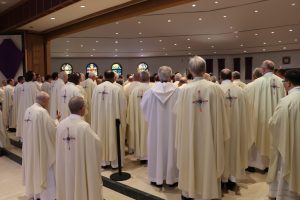 Carmelite Father Frederick J. Tillotson, Pastor of Our Lady of Mount Carmel Parish in Osprey, spoke for the jubilarians and noted what a privilege it has been to serve in the Diocese of Venice at a parish after more than 40 years in education. Father Tillotson said he sought work in a parish and was very fortunate to have been called to serve in the Order of Carmelites in a variety of ways throughout his 50 years as a priest.

Also celebrating 50 years of the priesthood was Msgr. Rollin J. Darbouze who assists at St. Maximilian Parish in Port Charlotte and Our Lady of Lourdes Parish in Venice.