Father George “Jerry” Hogan, the national Circus Chaplain, and who served seasonally at St. Martha Parish in Sarasota, died May 5, 2021 in Massachusetts at the age of 75. 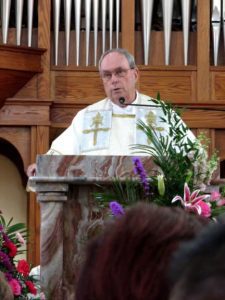 Father Hogan, a priest of the Archdiocese of Boston for 46 years, served for three decades as the national “Circus Chaplain” under the direction of U.S. Conference of Catholic Bishops Secretariat of Cultural Diversity’s Subcommittee on the Pastoral Care of Migrants, Refugees and Travelers (PCMRT). Bishop Frank J. Dewane is the Episcopal Liaison of the PCMRT.

As part of his service as national “Circus Chaplain,” Father Hogan was affiliated with St. Martha Parish in downtown Sarasota, which was designated as the “National Circus Parish” by the PCMRT. Splitting his time between his home in Massachusetts and Sarasota, Father was frequently on the road ministering to different circus troupes and performers.

Born on April 13, 1946 in Woburn, Massachusetts, he studied at St. John’s Seminary in Brighton, Massachusetts and was ordained to the priesthood on May 18, 1974 for the Archdiocese of Boston. It was in 1990 when he was approached to assist in the “Circus Ministry,” and Father Hogan often returned to St. Martha and served as host for the annual gathering of PCMRT pastoral workers each January. Since 2013, Father Hogan spent several months each winter assisting at St. Martha before returning to Massachusetts.

A Mass of Christian burial was celebrated May 10, 2021 at St. Michael Parish in North Andover, with burial following at Calvary Cemetery, Woburn. St. Martha Parish will have a Memorial Mass for Father Hogan at 10:30 a.m., May 22, 2021.