The Solemnity of the Annunciation of the Lord is a day we celebrate when the Blessed Virgin Mary said “Yes!” to God. 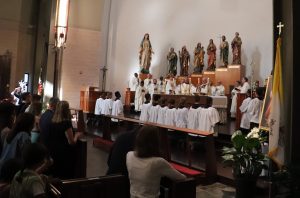 Celebrated on March 25, 2022, the Solemnity marks the Angel Gabriel’s appearance to the Virgin Mary (Luke 1:26-38), and his announcement that the Blessed Virgin has been chosen to be the Mother of Our Lord, and Mary’s willing acceptance of God’s Holy Plan.

To mark this Solemnity, Ave Maria Parish, Ave Maria University, as well as the entire town took part in various activities throughout the day.

Bishop Frank J. Dewane presided at the inauguration of the new Ave Maria University President Mark Middendorf, and was the principal celebrant for a Solemnity Mass.

Other events incorporated into the day included the Prayer of Consecration to the Immaculate Heart of Mary, an outdoor barbecue dinner, concert and fireworks.

Bishop Dewane said during the Mass that the faithful should learn from the example of Mary and apply Her willingness to be open to the call of the Lord in our own lives; as it is inspiring to know the Blessed Virgin Mary had the courage to say “yes.”

“Take the grace that the Lord gives each of us, and live it and go forward,” the Bishop continued. “We learn the important lesson that ‘nothing will be impossible for God.’ Mary said, ‘Behold, I am the handmaid of the Lord. May it be done to me according to your word.’ Then the angel departed from her’ (Luke 1:37-38). Without God, we cannot fulfill His Mission. Our Lady understood that, so must each one of us. We have to radically change our inner selves and have that same strength to do the will of the Lord.”

As part of the inauguration of Middendorf as the fourth President of Ave Maria University, Bishop Dewane presided over the Oath of Fidelity and Profession of Faith. 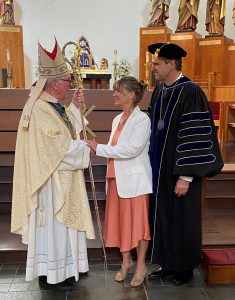 Following the Oath of Fidelity and Profession of Faith, an Investiture Ceremony took place wherein Middendorf was bestowed with the Seal of the Office of the President of Ave Maria University by Board of Trustees Chairman Patrick Rainey. Prior to this, Father David Vidal, Pastor of Ave Maria Parish, and others representing the students, faculty, alumni and Board of Trustees, spoke highly of the appointment of Middendorf as the new President of the University.

A native of Chicago, Illinois, Middendorf was educated at Northern Illinois University and DePaul University and had a successful corporate marketing and management career before discerning a special call to the New Evangelization. Middendorf founded a lay apostolate, Lighthouse Catholic Media (LCM), then the largest producer of Catholic audio talks in the world, reaching millions. Upon its merger with the Augustine Institute in 2015, Middendorf became the Institute’s Executive Vice President for Mission Expansion, and led the launch of formed.org platform. Middendorf also serves on the boards of 5 Stones, Ignatius Press, and the Marian Missionaries of Divine Mercy, and has been a long-standing member of Legatus.

Middendorf and his wife, Christine, are the parents of four children, one already a graduate of Ave Maria University and another currently enrolled.

When asked what his first priority would be as University President, Middendorf stated that he will be inviting all staff, students, and friends of Ave Maria to join him in entrusting themselves and the University to the care of our Immaculate Mother. He then added, “The University belongs to her. It has her name on it. As President, I see this as foundational.”