The Diocese of Venice continued its tradition by celebrating the Holy Sacrifice of the Mass for veterans who have served and continue to serve our country in the armed forces. 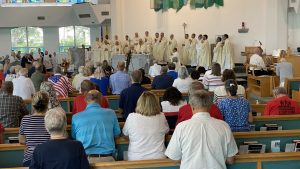 The annual Veterans Day Catholic Mass, celebrated by Bishop Frank J. Dewane, is in its 13th year, with the 2022 Mass celebrated at St. Patrick Parish in Sarasota. The Mass, which has been traditionally held at the nearby Sarasota National Cemetery, was relocated out of an abundance of caution for the safety of participants due to rains caused by Hurricane Nicole.

“We honor our veterans in a very clear way,” Bishop Dewane said. “They fought to promote justice and to defeat tyranny… They had a faith that what they were doing was right and needed to be done; they were fighting not just for one nation, but for all of humanity. In the end, they had faith that a just God would grant them mercy.” 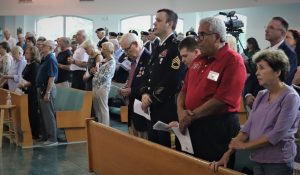 The Bishop noted that more than 41 million Americans have served in the armed forces over the course of the nation’s history and more than 1.2 million died in combat, causing everyone to pause and remember the sacrifice of not just the soldiers but of the families and friends whom they left behind.

“We celebrate the goodness, and the grace of each one of those individuals who serve their country and their God,” Bishop Dewane said, adding that veterans teach everyone “how to give totally of ourselves for one another to lay down one’s life in charity and love – our dear veterans have contributed all that they had, their whole life, many of them, for the sake of our greater good.”

The Veterans Day celebration opened with the singing of the National Anthem, and a presentation of a ceremonial wreath by one retired and two active members of the military. 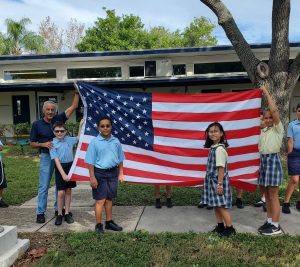 Adding to the dignity and ceremony of the day were active and retired veterans who were asked to stand and be recognized as part of the opening ceremonies. The Fourth Degree Knights of Columbus formed a Color Corps, and many other Knights were also present to support the veterans.

Following the conclusion of the Mass, everyone joined in reciting a Veterans Day prayer before singing God Bless America. The Diocese of Venice coordinates the Veterans Day Catholic Mass with the support of the Knights of Columbus and plans to return to the Sarasota National Cemetery in 2023. 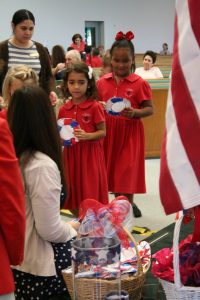 Each of the 15 Diocesan Catholic schools celebrated Veterans Day in different ways.

At St. Elizabeth Seton Catholic School in Naples, students processed to church with patriotic art projects for a Veterans Day Mass and tribute. The eighth graders led the tribute with a special flag folding ceremony, and hand-made wreaths were given to each veteran present, and prayers were offered for those not present.

These are just a few examples of how Catholic school students honored our veterans. 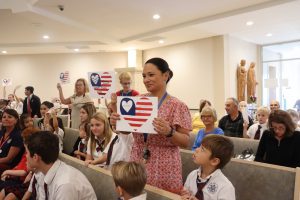 Veterans Day began as an informal celebration to mark the conclusion of World War I (Nov. 11, 1918), before being designated as a national holiday in 1954 to honor all military men and women who have sacrificed so much in their service to this country.