Retirement for many successful former Florida labor attorneys might encompass sunny days on the golf course and fancy lunches with his wife and friends, but not for Gene Tischer, who spends weekdays giving back to others in the name of Our Lord and Savior Jesus Christ. 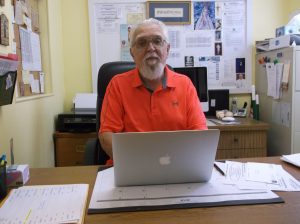 Most days Gene can be found teaching a Bible study at St. Patrick Parish in Sarasota, volunteering to gather food and supplies for a homeless mission in Bradenton or serving as a Diocese of Venice Prison Minister at the DeSoto Correctional Facility and the Florida Commitment Center in Arcadia.

Every Wednesday he awakes before dawn to prepare for the 135-mile round trip to the prison in Arcadia, where he holds Bible study classes for some of the most isolated people in our society – convicted felons.

He admits the men are so thankful for the teachings of the Bible and it becomes clear those in attendance want to repent for their mistakes, which is why Gene says he does this type of volunteerism.

“These are souls, and no soul shall be left behind,” he said, confidently shaking his head yes.

Since November 2016 he has been volunteering with the Diocese of Venice Prison Ministry first inside the Sarasota County Jail before being asked to join the DeSoto Correctional Facility in March of this year. He recalls how that happened.

“There wasn’t much to it. Father Russell (Wright, Parochial Vicar of St. Patrick) asked me to join the prison ministry team in Arcadia. Have you seen Father Russell?” Gene said, laughing. “It’s hard to say no to him!”

Father Wright is known to be persuasive when he believes in a cause such as sharing the Bible with prisoners.

Teaching the Bible is something Gene is not only passionate about but is skilled and trained to do. He entered St. Andrew Seminary in Rochester, N.Y., as a junior in high school, followed by four years at St. Bernard College Seminary. He attended Gregorian University in Rome for one year before deciding to study law at Georgetown University, where he met his wife Bobby.

The pair would adopt two sons, Jason and Tanner, just like his parents did when they thought they couldn’t have children.

“I was quite a surprise for my parents,” Gene recalls, being the youngest and only biological child of his parents, who raised all three children in Victor, N.Y.

When talking with the prisoners in the Bible Study class he tries to instill a better thought process in the men to have improved judgement in the future.

“I feel terrible sympathy for what some of these guys did. I feel much sympathy for the victim’s families too,” Gene said. “I tell these guys, it’s a horrible thing that you did, but Jesus died for your soul, He was on that cross and sees your face. He knew you were going to kill that guy, and He still wants you to live with Him in heaven – now do the work to get there.”

He exudes joy and confidence, which must be difficult these days as his wife battles chronic lymphocytic leukemia (CLL) and is now taking oral chemotherapy. But in typical Gene style he changes the subject to someone else’s misfortune.

“Please pray for our friend’s 16-year old child who is now battling an aggressive tumor.”

There are approximately 15,000 people incarcerated within the 10-county Diocese of Venice on any given day. These individuals populate 10 county jails and seven state prisons across the region. To minster to the spiritual needs of these inmates, there are about 150 volunteers who are actively involved in prison ministry. This includes 25 priests and 10 deacons. That is not nearly enough. For information about how to volunteer for Prison Outreach in your area, please contact Robert Hiniker at 863-558-0407 or hinbob5@hotmail.com.