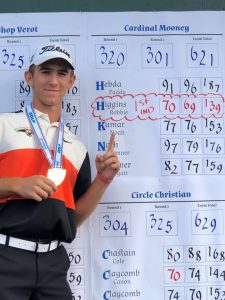 Higgins also lead his Cougar teammates to a fifth-place finish during the two-day team competition Nov. 1-2 at Mission Inn Resort and Club in Howey-in-the-Hills. The Sarasota team qualified for the state tournament by being the 1A Region 3 Boys champions. Fellow Cougar Noah Kumar finished 17th overall.

Congratulations to all the golfers for their outstanding effort and accomplishments which capped off an exciting season for each of them.