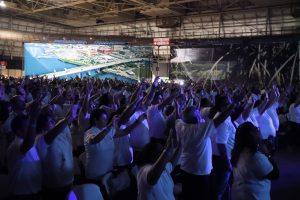 For about 1,000 people a recent Sunday was spent growing and better rooting their love for the Lord while also gaining a profound sense of devotion to the Blessed Sacrament.

These were some of the things learned during the 2nd Diocese of Venice Congress of Emmaus (Emaus) which took place May 19 at the Lee Civic Center in North Fort Myers. The event, which was in Spanish, was for those who have completed an Emmaus weekend retreat in the past and served as an opportunity to renew and recapture the fire that grew in them during their first retreat.

It was during that retreat during where they learned a new way to live their life, as Jesus taught in the Gospel of Luke with a particular emphasis on the story about the Road to Emmaus. 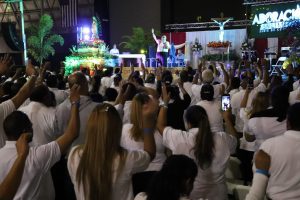 “Beautiful!” “Amazing!” “Powerful” “I felt Christ’s love!” These were just some of the reactions of people as they finished a 10-hour day. Between the speakers, the music and the community that everyone felt, the day was a huge success. Many commented on how uplifting and unifying the day was, bringing them closer to Jesus Christ is ways they did not expect.

Bishop Frank J. Dewane celebrated the closing Mass for the day and said he was very pleased to see such an enthusiastic group dedicating an entire day to growing closer to the Lord through the Blessed Sacrament. 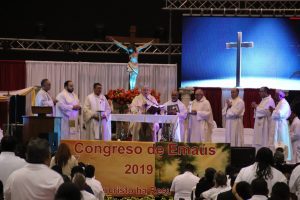 The Bishop specifically credited the Diocesan Spiritual Directors for Hispanic Emmaus, Fathers Jiobani Batista, Luis Pacheco and Luis Albarracin, for their commitment in supporting the Emmaus retreats and for bringing everyone together for the gathering to celebrate the Lord in a special way.

Father Batista, Pastor of St. Margaret Parish in Clewiston, said the goal of the gathering was to inflame the participants with the miracle of Risen Lord as we continue our spiritual journey during this Easter Season.

“We also wanted to convey a renewed and deep devotion to the Eucharist,” Father Batista said. “After going on an Emmaus retreat, the powerful impact can fade over time. This gathering is a renewal so that everyone will carry this message and bring their excitement back to their parishes, spreading the message of the Lord to others.”

Each of the talks focused on the Eucharist. During the say, there was Eucharistic Adoration, the Chaplet of Divine Mercy and music all building upon the theme. This led everyone toward the climatic conclusion of the day, the celebration of the Eucharist during the Holy Sacrifice of the Mass.

The Emmaus retreat program is a Diocesan-approved retreat weekend that takes place three times a year in both English and Spanish. It’s open to all men and women ages 20 or older seeking to grow in their relationship with Christ regardless of their present level of faith and practice. The purpose of the weekend is to give adults the opportunity to reflect upon themselves, their relationship with God and their community.