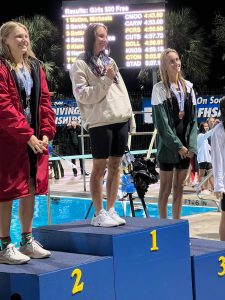 Michaela Mattes took the State Championships in the 500 Freestyle for the fourth year in a row and came in second in the 200 Individual Medley, proudly representing her Sarasota school. Michaela completes her swimming career as the most decorated Mooney athlete and will go on to swim for the University of Florida in the fall.

Michaela took the 500 Freestyle with a dominating time of 4:43.80, more than 9 seconds faster than her nearest competitor. Her winning time earned her automatic All-American status with the National Interscholastic Swimming Coaches Association (NISCA). She was also State Champ in the same event as a freshman, sophomore and junior. 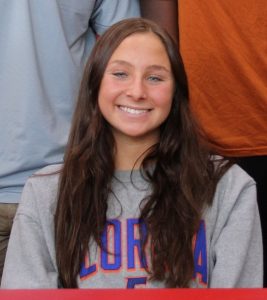 In the 200 individual medley, Michaela took silver with a time of 1:59.27, again earning All-American status. This was also the fourth consecutive year Michaela medaled in the event, taking gold in 2020 and silver in 2019 and 2021. On her own, Michaela took 15th in the team competition.

The 1A State competition was delayed one week due to impacts from Hurricane Nicole.