A question which has baffled religious scholars for millennia – “How do you get teens to get excited about their faith?” – may have found a solution in Fort Myers. 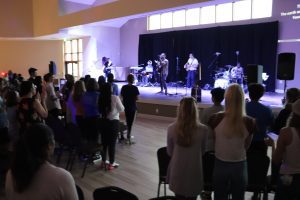 The answer, good music, and a chance to let loose for an evening which ultimately focused on the Blessed Sacrament and an examination of their faith.

On Aug. 28, 2022, the regularly scheduled youth outreach meetings at Parishes across Lee County were instead directed to St. John XXIII Parish, where the Parish Youth Council hosted a free summer concert event featuring EPIC the Band, for a night of music, adoration, faith and fun.

EPIC the Band is a young and vibrant group of artists based in Miami, who have dedicated their lives to sharing the Gospel through music. EPIC will be touring with Matt Maher in 2023. The band has appeared in the Diocese of Venice in the past and theirs is a sound that blends multiple genres.

The night opened with some beachballs being tossed around and music blaring as the teens got into the fun of the night.

Lead Guitarist Luis Castro spoke to the teens during and between the various songs, sharing the meaning of the music and how each member of the band has gone through a spiritual journey to bring them to this point. 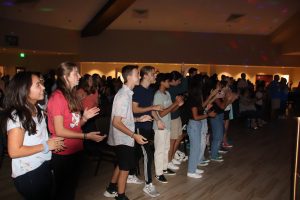 “Ups and downs, from darkness to the light of God,” he said, adding that everyone’s spiritual journey has these moments which are comforted by an undeniable reality. “The Lord is the One who always believes in you; who never gives up on you; who loves you no matter what; who will comfort you; who will lift you up; who will help you find your way. He does this because you are His child, precious and beautiful.”

Guiding the youth, and many adults, through their songs, Castro and the band members encouraged everyone to join in as the songs were created out of their collective love for God and His people which is poured out in musical praise.

While some teens stayed in the background, for much of the music was unfamiliar, many others joined in clapping to the beat and echoing lyrics they learned.

“This is great,” said one girl from Resurrection Parish. Another from Our Lady of Light Parish said she had “lots of fun.”

During the second set of music the evening pivoted to include Adoration of the Blessed Sacrament when Castro called on everyone to “point your gaze toward the Lord; He is why we are here.” 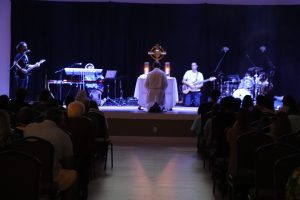 Father Simon Hoang Minh Dao, CRM, came forward to the stage and placed the Blessed Sacrament into a monstrance on a prepared table.

While everyone kneeled, the music continued in a solemn tone with a mix of sacred music and instrumental background. Father then led everyone in prayer before taking the Blessed Sacrament to a place of repose.

The event was free for everyone, but there was a concession for pizza and drinks, and a 50/50 drawing.

Kelly Evers, St. John XXIII Coordinator of Youth and Young Adult Outreach, said the evening was a huge success, with 338 in attendance, adding that this is the latest joint youth effort among Parishes in the area.

“We are working to help reach our youth in different ways,” Evers said.

The Parish has a High School Social program after Masses once a month. This program is intended to build a strong connection to the Parish because high school-aged students are often at risk of straying from their faith during these formative years.

Meanwhile, a Middle School Youth Group meets Wednesday evenings, providing a place for youths to identify their place in the Church, grow in their faith, and together in fellowship. The outreach is intended to help youths and families become more actively involved in the parish life.

Other Parish youth leaders also had groups at the St. John XXIII event. The Sunday night gathering served as an unofficial kick-off to the fall religious education season. Several Parishes are also expanding their middle and high school outreach efforts, trying to keep the teens connected to the faith. Many are nearing, or at the time they should be seeking the Sacrament of Confirmation, while others may have completed this goal and are now seeking a security of their future place in the Church.

Evers said the answer to that is simple, these teens are the Church, the present and the future.