The faithful of St. Agnes Parish in Naples remember well the kindness and generosity of strangers who lent a helping hand in 2017 following the devastating impacts of Hurricane Irma. 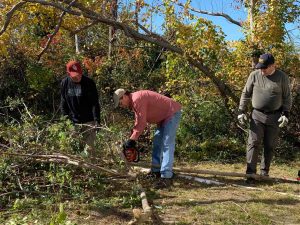 So, it was natural for the parishioners to rally together and help when Hurricane Michael struck the Florida Panhandle in October 2018. That help continues to this day.

The initial efforts included teams from the Parish making several trips with collected relief supplies, to assist in Panama City where nearly every structure in the community had major damage. Those supplies included thousands of emergency supplies collected from a Diocese of Venice initiative, then additional recovery supplies as the needs changed for those impacted.

During a period of several months, teams from St. Agnes served in relays to help transport and then distribute donated items. While the number of trips lessened as time passed, the people of Panama City were never far from the mind of the people at St. Agnes.

This is why a small group, led by Deacon Henry deMena, passed on a traditional Thanksgiving to help the Panama City offices of Catholic Charities of Northwestern Florida continue in its recovery. 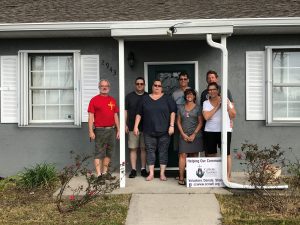 “The people of Catholic Charities have been so busy helping others that they had never had the opportunity to clean up their own property,” Deacon deMena explained. “We cut down dead trees, cleaned up brush and mowed their lawns.”

While it’s been more than a year, the visible impacts of the storm remain apparent. Dana and Monte Hilmoe commented, “You can’t (understand) the devastation, even now, unless you see it in person.”

Before returning to Naples, the group attended Mass at St. Dominic Parish, which is where the relief supplies from St. Agnes and the Diocese of Venice were distributed. The Mass was held under a tent as the church continues to be rebuilt.

“As with Catholic Charities, St. Dominic too spent most of their efforts on the public and put their own needs second.” Deacon deMena explained.

In addition to Deacon deMena and the Hilmoe’s, the group included Paul and Heather Unsworth, as well as Rich and Lisa Dahn.