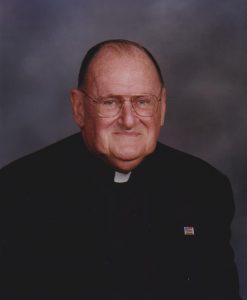 Father Sullivan was born the second son of Joseph Sullivan and Ruth Keiter, on Aug. 6, 1936, in Newton, Massachusetts. Ordained to the priesthood on May 1, 1964, at St. Michael Monastery with the Passionate Congregation in Union City, N.J., Father Sullivan served for four years in the northeast leading missions and retreats.

Eventually, Father Sullivan arrived in Florida to become associate retreat director at Our Lady of Florida Spiritual Center in North Palm Beach. In 1970, Father was the founding Pastor of St. Paul of the Cross Parish in North Palm Beach and served there for 12 years. He returned to New Jersey serving in a merged Parish there before returning to Florida when the Diocese of Venice was erected in 1984.

Father’s first assignment in the Diocese of Venice was as Administrator of St. Isabel Parish in Sanibel (1984-1985) before becoming Administrator of Our Lady of Mercy Mission (now Parish) in Boca Grande (1985-1988). Father Sullivan was then named co-Pastor of San Marco Parish in Marco Island (1988-1990), before being assigned as Pastor of St. Ann Parish in Naples (1990-1993).

It was in 1993 when Father Sullivan helped establish St. Columbkille Parish in south Fort Myers as Pastor. The first liturgies were celebrated in modular units before a Parish Church was built in 1997.

Then in 2002, Father was founding Pastor of St. John XXIII Parish (formerly Blessed John XXIII Mission) in Fort Myers which held its first liturgies at Noonan Elementary. Once again, Father oversaw the construction of a new Parish Church, which was dedicated in 2005.

Throughout his ministry, Father Sullivan was active in prison outreach and a strong supporter of the Cursillo Movement. Shortly after his 70th birthday, Father Sullivan retired from active ministry on Sept. 1, 2006.