Bishop Frank J. Dewane presided over the ordination of Father Franckel in a Rite of Ordination, an age-old ceremony that was witnessed by the faithful on June 27, 2020 at Epiphany Cathedral in Venice. 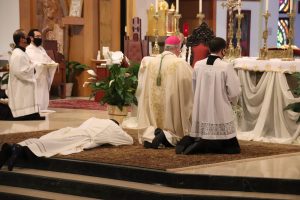 Bishop Dewane told Father Franckel that through ordination, he becomes forever raised to the rank of priest in the Body of Christ. With that rank comes great responsibility – to sanctify, to teach, to love and serve just as Christ taught.

“Thank you for coming forward in your response to the call of Jesus Christ,” Bishop Dewane said of the long and sometimes difficult journey made by Father Franckel to reach this moment. “We celebrate you as you are sent forth to preach the Gospel; to be the Good Shepherd of God’s people; and to celebrate the Liturgy, especially the Lord’s Sacrifice on His Table. In doing so you bring together the faithful of the community as you pray with them and for them to the Lord.”

Father Fils-Aime, 41, who was born in the Cornillon region of Haiti in the town of Potino, said he feels blessed by God to be ordained and feels the love of the people of the Diocese of Venice. “I am grateful for all of the prayers and support I have received during this journey and feel I am prepared to serve the people as I continue to trust in God.” 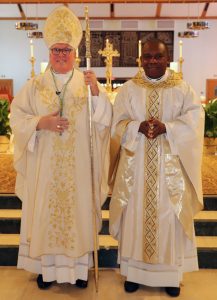 The ordination was a bright moment for the Diocese during this time of the COVID-19 Pandemic. All present wore masks and maint

ained social distancing. While there were many family and friends present, the immediate family of Father Franckel was not able to attend as they were home in Haiti, unable to travel. To help bridge that gap in distance, the ordination was streamed live through social media.

To start the Rite of Ordination, Diocese of Venice Vocations Director Father Shawn Roser called Deacon Franckel forward as he presented himself for ordination to the Bishop. The Bishop, on behalf of the entire Church, accepted Franckel and called him to ordination as a Priest by saying: “Relying on the help of the Lord God and Our Savior Jesus Christ, we choose Franckel Fils-Aime, our brother, for the Order of the Priesthood.”

During the Rite of Ordination, Fils-Aime knelt before Bishop Dewane to express his desire and willingness to be ordained as a Priest and to fulfill the responsibilities that come with ordination, which included a promise of respect and obedience to the Bishop and his successors. Fils-Aime then lay prostrate before the altar for the Litany of Supplication (Litany of Saints).

After this solemn act of prayer, the Sacrament of Ordination was conferred when Franckel again knelt before Bishop Dewane, whom in silent prayer, imposed his hands on the head of the ordinand. Each priest then came forward to pray over Father Fils-Aime. Next, Bishop Dewane, with his hands outstretched, prayed the Prayer of Ordination. 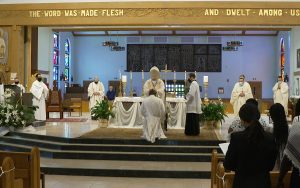 Father Franckel was then vested in stole and chasuble by Father Timothy Navin, Pastor of San Marco Parish in Marco Island, the location of his first pastoral assignment as a seminarian of the Diocese. The hands of Father Franckel were then anointed with the Sacred Chrism by the Bishop, the sign of the special anointing of the Holy Spirit who will make his ministry fruitful.

Next, the Bishop presented Father Fils-Aime with the chalice and paten which all priests are called to present to God in the Eucharistic Sacrifice. The Rite of Ordination is concluded with the Bishop giving a fraternal kiss of peace to the newly ordained priest, welcoming him into the Diocesan Presbyterate or priesthood. Bishop Dewane introduced Father Franckel to all those present to enthusiastic applause. 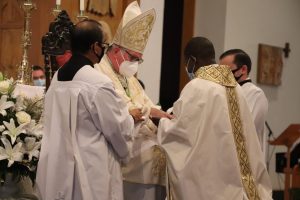 A recent graduate from St. Vincent de Paul Regional Seminary in Boynton Beach, Father completed more than 14 years of priestly discernment and formation. He first entered seminary in the Dominican Republic studying to become a Franciscan Capuchin Friar. He spent nine years in formation before discerning a call to Diocesan priesthood in Venice. During this time, he studied in the Dominican Republic and Brazil, eventually earning a philosophy degree from Centro Universitario Franciscano in Brazil.

Father Franckel learned of the Diocese of Venice through holiday visits to the area which included participation in the annual New Year’s Day Mass celebrating the anniversary of Haitian Independence for the Haitian Catholic Community of the Diocese of Venice. There he met Msgr. Patrick Dubois who then arranged an introduction and meeting with Bishop Dewane.

In addition to his pastoral assignment at San Marco Parish, he later held summer assignments at Our Lady of Grace Parish in Avon Park, St. Peter the Apostle Parish in Naples, St. Joseph Parish in Bradenton, as well as a pastoral year at Epiphany Cathedral.

The Ordination was followed by a reception in the Cathedral Parish Hall where newly ordained Father Franckel Fils-Aime was available to greet the public and impart his priestly blessing on them. 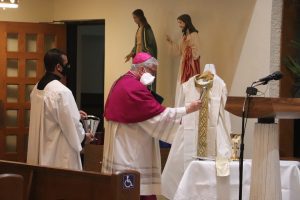 On the eve of his ordination, a Solemn Vespers was celebrated at San Marco Parish for then-Deacon Fils-Aime. During this prayer service Bishop Dewane blessed the priestly vestments and chalices which were used by the newly ordained at his first public Masses on June 28, 2020.

The first Mass celebrated by Father Franckel was at San Marco Parish. There, Father admitted that when he first arrived at the Parish in 2015 his English was limited and credits the priests and staff of San Marco for how well he speaks the language, and how poorly, he joked. During the Mass, he added: “The people of San Marco welcomed me with their hearts open and I consider them to be a part of my family,” he said. “I love you all for what you did for me and who you are.” 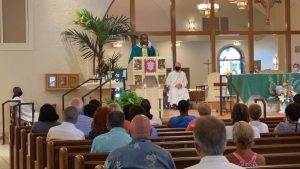 As is tradition, during the first Mass of a newly ordained priest, another priest delivers the homily. In this case it was Father Jack Costello, Rector of Epiphany Cathedral in Venice, who spoke about then-Seminarian Franckel serving a pastoral year at the Cathedral. Father Costello noted how blessed the Diocese was to have a new priest, one who is well prepared to serve the faithful with sincerity and compassion.

The second Mass of the day was in the afternoon, celebrated in Haitian Creole at St. Francis Xavier Parish in Fort Myers. While there are nine active priests serving in the Diocese from Haiti, Father Fils-Aime was recognized as the first Haitian priest to be ordained for the Diocese in more than 15 years. Father Jean Woady Louis, Parochial Vicar of Holy Cross Parish in Palmetto, delivered the homily noting how important it is to have a priest to provide the Sacraments in their native language. 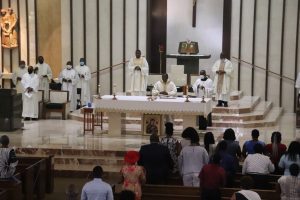 At both Masses, which were streamed live on social media so his family and friends could watch from afar, Father Fils-Aime shared how his parents, Voguel Fils-Aime and Philomène Remy, supported his discernment for a vocation to the priesthood. He expressed regret that his mother, who passed away in 2011, was not alive to see him reach his priestly ordination but was confident she was present in spirit and watching over him. 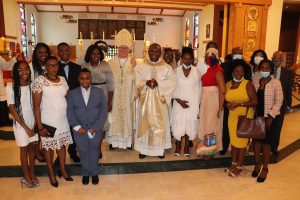 “It is such a privilege and honor to be called by God and I do not have the words to give thanks to the Bishop for the opportunity to be a priest here in the Diocese of Venice.”