The presbyterate of the Diocese of Venice in Florida grew by one with the Ordination to the Priesthood of Father Carlos Encinas. 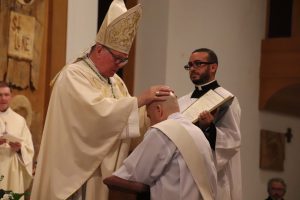 Bishop Frank J. Dewane presided over the ordination of Father Carlos in a Rite that was filled with long tradition and witnessed by hundreds Oct. 5 at Epiphany Cathedral in Venice.

The Bishop told Father Carlos that through ordination, he becomes forever “United to the Sacrifice of Christ.” That unity is also with the Bishop and the Universal Church led by Holy Father Pope Francis. 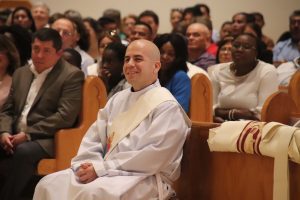 “You are called to be that Church as you go out and strive to minister to the people of God,” Bishop Dewane continued. “Be the example of the Good Shepherd and go out and find the lost sheep who have the strayed by being the Light of Christ to others who might be in darkness.” 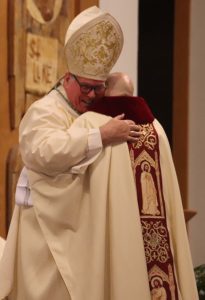 To start the Rite of Ordination, Diocese of Venice Vocations Director Father Shawn Roser called Deacon Carlos forward as he presented himself for ordination to the Bishop. The Bishop, on behalf of the entire Church, accepted Carlos and called him to ordination as a Priest by saying: “Relying on the help of the Lord God and Our Savior Jesus Christ, we choose Carlos Encinas, our brother, for the Order of the Priesthood.”

During the Rite of Ordination, Encinas knelt before Bishop Dewane to express his desire and willingness to be ordained as a Priest and to fulfill the responsibilities that come with ordination, which included a promise of respect and obedience to the Bishop and his successors. Encinas then lay prostrate before the altar for the Litany of Supplication/Litany of Saints. 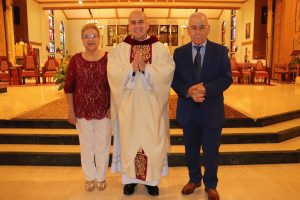 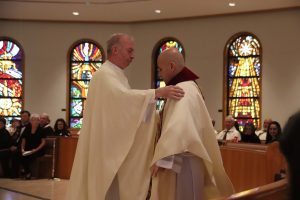 Father Carlos was then vested in stole and chasuble by Father Gerard Critch, Pastor of St. Peter the Apostle Parish in Naples where Encinas had recently served as Transitional Deacon. The hands of Father Carlos were than anointed with the Sacred Chrism by the Bishop, the sign of the special anointing of the Holy Spirit who will make their ministry fruitful. 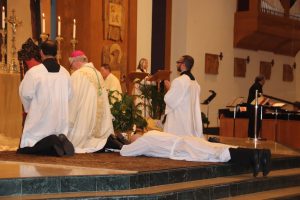 Next, the Bishop presented Encinas with the chalice and paten which all priests are called to present to God in the Eucharistic Sacrifice. The Rite of Ordination is concluded with the Bishop giving a fraternal kiss of peace to the newly ordained priest, welcoming him into the Diocesan Presbyterate or priesthood. Bishop Dewane introduced Father Carlos to all those present to enthusiastic applause, before all priests came forward to offer the sign of peace. 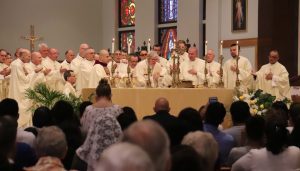 In addition to families and friends from Argentina, there were faithful from across the Diocese, many from the parishes where he previously had served. Included among those were also representatives of the Knights and Dames of the Order of Malta, and the Knights and Dames of the Equestrian Order of the Holy Sepulcher of Jerusalem, as well as Diocesan seminarians who served during the Mass. Father Carlos was also pleased that a number of priests and fellow graduates from St. Vincent de Paul Regional Seminary, many of whom were ordained earlier in the year, were able to attend. 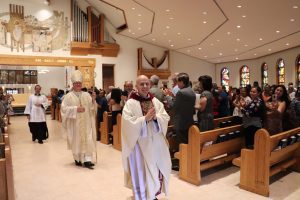 The Ordination was followed by a reception in the Cathedral Parish Hall where newly ordained Father Carlos Encinas was available to greet the public and impart his priestly blessing on them.