The Diocese of Venice is mourning the loss of Father Edward Pick, the retired founding Pastor of St. Mary, Star of the Sea Parish in Longboat Key, who passed away March 27, 2021 at the age of 86. 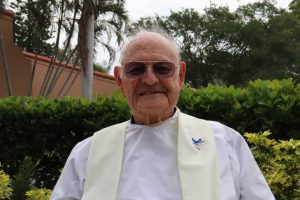 Born on February 22, 1935 in Cincinnati, Ohio, Father Pick grew up in Florida and returned to Ohio to attend St. Gregory Seminary and Mount St. Mary of the West Seminary (now known at the Athenaeum of Ohio) in Cincinnati. He was Ordained to the Priesthood on May 28, 1960 in Cincinnati.

Since his ordination, Father Pick served in the Archdiocese of Miami and the Diocese of St. Petersburg with Parishes in Lake Worth, Miami, North Miami, Boca Raton, and Fort Lauderdale.

Having been incardinated in the Diocese of Venice since its inception in 1984, Father Pick was Pastor of Sacred Heart Parish, Punta Gorda from 1968 to 1973 and served briefly at Our Lady of Mercy Mission on Boca Grande before becoming the founding Pastor of St. Mary, Star of the Sea Parish in Longboat Key in 1973.

Masses at St. Mary, Star of the Sea were originally celebrated in a fire station before the current church was built in Manatee County, just north of the Sarasota County line. He served at the Parish from November 21, 1973 until his retirement on May 1, 2008.

Known as a “gentle giant,” referring to his 6-foot 6-inch frame, Father Pick actively supported area Catholic schools and traveled up north seeking support for Diocesan migrant programs. Within the Diocese of Venice, he served as Dean of the Northern Deanery and was appointed a Knight of the Equestrian Order of the Holy of Sepulcher by St. Pope John Paul II. In his retirement, Father Pick continued to assist at the Parish.

Funeral arrangements will be forthcoming.