When given the opportunity to ask Bishop Frank J. Dewane a question, several young men and women directly inquired where they fit in today’s Catholic Church. 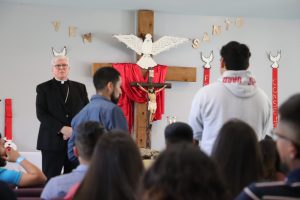 These questions came Nov. 24 during a visit by Bishop Dewane to a Spanish-language Youth Catholic Charismatic Renewal Retreat at the Lake Placid Camp and Conference Center. This was one of several retreats taking place during late November for Spanish-language participants in a number of movements. 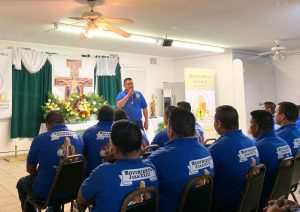 On the weekend of Nov. 15-17, members of the John XXIII Parish Retreats Movement gathered at Campo San Jose Retreat Center in Lake Placid. About 25 men took part in the retreat with family and others taking part on the final day for the closing Mass.

The John XXIII Movement is a private international association of laity, with the goal of leading marginalized communities to God. After completing the retreat, participants are encouraged to attend faith-formation classes and weekly meetings to strengthen their faith and personal relationship with God. Rooted in Eucharistic Adoration, the ministry serves the Church and its people through love, surrender, and sacrifice.

On Nov. 24, the MDS, (Matrimony, Dialogue and Accompaniment) group gathered at Campo San Jose for a retreat. This is a Catholic based enrichment program directed to all married couples; which is designed to improve communication and the conjugal life for the couple. About 60 couples participated in the retreat.

Bishop Dewane celebrated Mass, the Solemnity of Our Lord Jesus Christ, King of the Universe, for the retreatants and praised the effort of the leadership in promoting the Sacrament of Holy Matrimony to others. The Bishop noted that by joining in the Sacrament the couples come together by sharing their life with each other and place themselves before Christ the King. “Let the Lord be the King of your marriage and put your focus there.” 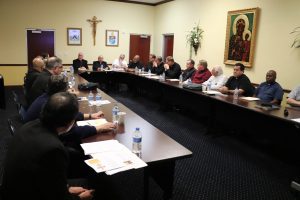 The Bishop also hosted a gathering of priests who serve the Hispanic community in the Diocese for a meeting at the Diocese Chancery in Venice on Nov. 26. This meeting provided the Bishop an update on the engagement of Hispanic Catholics, including success stories and the challenges faced in the Parishes, Diocese and on the national levels.

The group also spoke about implementing more of the ideas developed during the V Encuentro process, a nationwide initiative of the U.S Conference of Catholic Bishops to discern ways for the Church in the United States to better respond to the ever-growing Hispanic presence. The ultimate goal is to strengthen the ways in which Hispanics/Latinos respond to the call of the New Evangelization as integral parts of the Church in the United States.

Answering questions from the young

In front of the youth participating the Catholic Charismatic Renewal retreat, the Bishop was asked questions related to the same issue, specifically about what he is doing to reach out to young Hispanics. The questioner noted that there is a real desire for many to become more involved in the Church, but they do not know where to turn for answers.

Emphasizing that this is an imperative issue for him, Bishop Dewane said more needs to be done to reach Hispanics throughout the Diocese. He is working to do that in a variety of ways, including increasing the number of Spanish-speaking clergy, and by having more Spanish-speaking presenters come to the Diocese and to parishes. The first part of that effort in the Diocese has been the rapid expansion of the Hispanic Apostolate.

While talking to the retreatants, the Bishop spoke about how they are at a critical time in the life with regards to their Faith. For this reason, he stressed the importance for them to limit their interaction with people and things that pulls them from developing their relationship with the Lord.

“You each know the people that turn you away from the Lord,” Bishop Dewane said. “You know better than anyone how that phone or that computer can take you to dark places. Only you can make the choice to put aside those distractions and focus on the Lord.”

Continuing, Bishop Dewane noted that each one of them have been given the strength to answer the call of the Lord and to be ‘A Disciple of Christ.’

“Learn what Jesus taught,” the Bishop added. “Use the saints and the apostles as examples of how to answer that call. Know that you will not always be perfect in your response to that call, but also know that the Lord will help pick you up so you can carry on this journey.”

The Bishop was also asked about his own discernment for a vocation to the priesthood; to explain the concept of predetermination; as well as how to balance in one’s life the perceived conflicts between science and religion.

Following his question and answer session, the Bishop had lunch with the young men and women. Several took that opportunity to ask their questions in private.