A group of women and men who will join the Catholic Church within the Diocese of Venice at the Easter Vigil were recognized during the annual Rite of Election at Epiphany Cathedral on the first Sunday of Lent on March 6, 2022. This annual tradition is a formal Rite during which catechumens are presented and their names are entered into the Book of Elect. 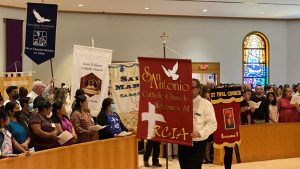 The 156 catechumens (individuals who are not yet baptized) were joined by an additional 247 candidates (already-baptized Christians preparing for confirmation and First Eucharist), who also participated in the formal ceremony and are recognized during the celebration for answering the call to their continuing conversion. The Cathedral was nearly at capacity as many family members were also present to show their support.

The Rite of Election was presided over by Bishop Frank J. Dewane who said he was humbled by the large number present and complimented each for making the commitment to publicly announce the call of the Holy Spirit in a particular way by becoming active members of the Catholic Church in the Diocese of Venice. “You are the brave and courageous. The Spirit of the Lord is upon you.” 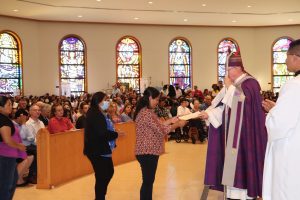 The catechumens and candidates, who were recognized by Bishop Dewane, are on a continuing journey that will culminate when they come into full communion with the Catholic Church at the April 16 Easter Vigil Mass in their respective Parishes.

The group represent 45 Parishes in the Diocese of Venice and are accompanied by tens of thousands of others across the country that will also join the Catholic Church this year. St. Peter the Apostle Parish in Naples, Jesus the Worker Parish in Fort Myers, and Our Lady of Guadalupe Parish in Immokalee had the largest groups of catechumens and candidates.

Bishop Dewane said that each of the catechumens and candidates were responding “to a call within their soul that said to them: ‘I need to be baptized.’ ‘I need to become more active in my Faith.’ ‘I need to give a greater witness as to who the Lord calls me to be in my life.’” 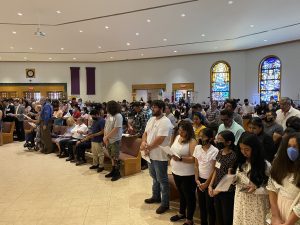 Bishop Dewane said this process should be a conversion of the heart, as each catechumen and candidate must prevent outside influences, such as things, people or objects, standing in their way of developing their relationship with the Lord.

“Go forward knowing the Holy Spirit will aid you in this journey,” the Bishop added. “You have been called to be catechumens and candidates… it is human nature to stumble along the way – but keep working to become ever more that man or woman of God you are called to be.”

The catechumens are part of the Rite of Christian Initiation of Adults (RCIA). RCIA is for those who are unbaptized and unchurched, who come to inquire about becoming part of the Roman Catholic Faith in a process that takes about a year. Often catechumens are those who have begun to seek and understand God in their lives and have been led by the Holy Spirit to become Catholic. RCIA is a journey of discovery and faith. This is most commonly done is three distinct phases: discernment, acceptance into the catechumenate along with purification and enlightenment. 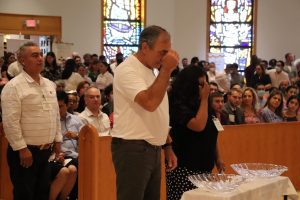 Each catechumen will go through a series of scrutinies during which they examine their readiness to accept Christ and the Catholic Faith in the form of the Sacraments of Initiation (Baptism, First Communion, Confirmation). This time culminates at the Easter Vigil when the catechumens are received through Baptism into the Catholic Church. The final period of the RCIA is the time of “Mystagogy” (post-baptismal catechesis). During the weeks following the Easter Vigil, the newly initiated live more profoundly their experience of Baptism and the Eucharist as they begin the journey of discipleship and their growing union with Christ. 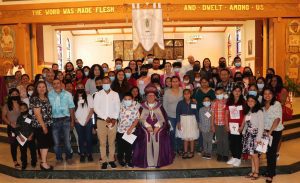 For candidates, those who have been correctly baptized with a Trinitarian formula, the Catholic Church does not require re-Baptism. Candidates have already experienced a journey of faith and have an understanding of how Jesus leads us to the Father through the work of the Holy Spirit. In fact, many have been attending Mass with their families for years but may have never received the Sacrament of Holy Communion or the Sacrament of Confirmation.

The candidates are invited to the Cathedral for the Rite of Election as a form of welcome, but because they are already in the Book of the Elect as baptized Christians, they do not bring their names forward; but to symbolize that baptism, and as a sign of their continuing conversion, they come forward and make the sign of the cross with holy water.

Everyone is encouraged to pray for and welcome the catechumens and candidates at their own parish as they continue their journey of discovery in their Faith.