Girls and boys from throughout the Diocese of Venice participated in a Mass on May 5 at Epiphany Cathedral in Venice wearing the uniforms of their Scout troop. 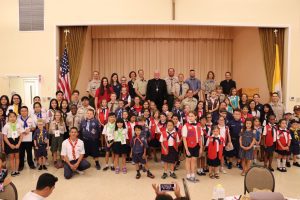 Designated as “Scouting Sunday,” the Mass was followed by an award ceremony in the Parish Hall to celebrate and recognize the girls and boys who commit themselves to scouting while remaining true to the Faith. Members of the Boy Scouts, Cub Scouts, Girl Scouts, Brownies, American Heritage Girls (AHG) and the Vietnamese Eucharistic Youth Society participated in the ceremony. 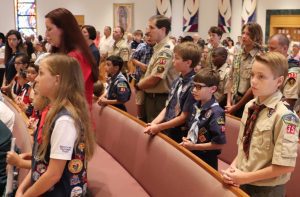 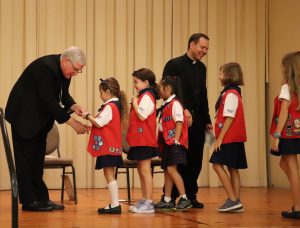 During the awards ceremony, Diocesan Scout Awards Coordinator Bob Paquette presented Dewane was presented with the Quality Diocese Award, which is given to a Diocese for its commitment to supporting Catholic Scouting. This is the 10th year in a row the Diocese of Venice has received this award.

Lastly, Melissa Harkness of the American Heritage Girl Troop 1203 at St. Francis Xavier parish in Fort Myers was presented the Companions on the Journey Award, the highest recognition from the National Federation for Catholic Youth Ministry for a Diocese to confer to an adult working in youth ministry.

Recognizing the hard work and commitment that the Scouts from throughout the Diocese of Venice make to earn the Catholic Religious Awards, Bishop Dewane congratulated each of the award recipients and all Scouts.

Participating in the ceremony was Scouts Chaplain Father Lawton Lang, who is an Eagle Scout, and Diocese of Venice Director of Evangelization Joshua Mazrin.