Participation in Catholic Scouting is an act of discipline which strengthens body, mind, and soul, but it is also a powerful tool of evangelization and service. 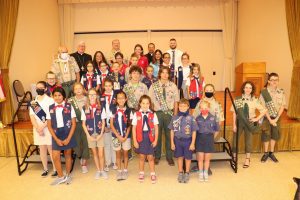 Bishop Frank J. Dewane recognized all Catholic Scouts and members of comporable groups in the Diocese of Venice during the annual presentation of Religious Awards on May 16, 2021 at Epiphany Cathedral in Venice. Prior to the awards presentation about 100 Scouts, Scout leaders and family members, took part in Mass for the Ascension of the Lord Sunday which was celebrated by Bishop Dewane and concelebrated by Father Lawton Lang, Diocesan Scout Chaplain.

During the awards ceremony Bishop Dewane recognized the challenges faced by all during the Pandemic as they worked to earn the various religious awards offered by different Scouting or similar groups. During the ceremony 154 awards were presented to 75 Scouts, some receiving multiple awards. Emily Black of American Heritage Girls Troop 1203 of St. Francis Xavier was the recipient of 17 different awards.

“Your hard work was commendable and identifies your dedication to the Catholic Faith as lived out through Catholic Scouting in the Diocese,” Bishop Dewane said before personally congratulating and presenting each award. “I hope that as you continue to experience the many varied lessons of Scouting, you will also continue to grow in your relationship with Jesus Christ and share that experience with others.” 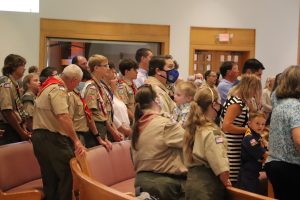 Of note at the awards ceremony was the presentation of the Pillars of Faith award to Bartosz Fabinski, of Boy Scout Troop 777 of St. Francis Xavier Parish. This award provides special recognition for youth in Scouting who earn all traditional Catholic Religious Medals: Light of Christ, Parvuli Dei, Ad Altare Dei and Pope Pius XII. This is the first time this award has been presented to a Scout in many years as it requires earning key awards at various stages in beginning at the age of 6 or 7 and continuing to age 15 or older. To make this recognition possible this year, Bartosz was able to earn the Pope Pius XII award, the final award in the sequence.

The Pius XII award is also rarely presented and requires a Scout to be 15 or older and educated on different vocations (single, married, religious, ordained). This also incorporates a discussion on current issues facing the Church and society and included an overnight camping retreat at St. Agnes Parish in Naples. In all, 10 Boys Scouts earned this award which was presented in the Diocese for the first time in 10 years.

Near the conclusion of the ceremony, Bishop Dewane was presented with the “Quality Diocese Award,” earned by only 40-50 percent of Dioceses nationally, for meeting certain requirements in supporting Catholic Scouting. This was the eighth year in a row the Diocese has earned this important award. The Bishop noted that while the award is given to the Diocese specifically, it is truly a reflection of the hard work and commitment of Scouts and Scout leaders throughout the Diocese.