Before the global pandemic COVID-19 altered our world as we know it, the community at Pope St. John XXIII National Seminary, like many communities, was working hard and was focused on serving others. Below is an interview by seminarian Dan McHale ’21, from the Diocese of Albany, with fellow third-theologian, Deacon Mark Harris of the Diocese of Venice, about Mark’s witness to life in January.

Throwing a baby shower at a Roman Catholic seminary seems as incongruous as holding a high school prom at a retirement home.  But as his brother seminarians will attest, Deacon Mark Harris ’21, a third theologian from the Diocese of Venice, thinks outside the box. Thanks to chronic foot problems – which recently required surgery – Harris was unable to join many of his Pope St. John XXIII National Seminary classmates at the annual March for Life rally, held this past January 2020 in Washington, D.C. However, despite his physical limitations, Harris still wanted to do something to support the pro-life cause. “There’s always a need for stuff for women who’ve had babies, so I thought, ‘why don’t we throw a baby shower at the seminary that ties in with the March for Life?'”

Soon after receiving approval for this project, Deacon Harris began decorating the vestibule area outside the seminarians’ mailroom, creating a festive display complete with balloons, paper Valentine’s Day hearts, and colorful baby-themed decor. He then invited seminarians and staff of Pope St. John to leave shower gifts on one of two vestibule tables. The community was very supportive. “We got a lot of diapers,” Harris noted, “And we also received some clothing, as well as things ranging from bottles to diaper ointment.”

In addition to the donations of baby goods, Deacon Harris also collected money for the cause, some of which he used to go shopping for more necessities. “Target’s website was running an online promotion that gave a discount plus a $20 gift card for every $100 spent, so we maximized what we could,” he said.  After purchasing the items using his computer, the former schoolteacher would pick them up at the local Target in Framingham.

One evening, after returning from the store, he ran into Father Vin Daily, one of the resident spiritual directors at Pope St. John, who suggested the baby shower gifts be donated to the Pregnancy Care Center (PCC) of the Merrimack Valley, which operates out of the former rectory of St. Rita Parish in Lowell. The PCC “is a Christ-centered, pro-life ministry,” explains Alicia Hines, the Client Service Manager. The organization is geared especially towards supporting women with unexpected pregnancies, offering them “mentoring, education and material support like food, clothing and furniture until their child is one year old.”

St. Rita Parish – part of the River of Divine Mercy Collaborative – is shepherded by its pastor, Father Rich Clancy, who Father Daily knew back from his own seminary days and later lived with him in Dorchester. When Father Daily put in a call to his close friend to find out if the PCC could use the donations, Father Clancy responded that they “would be delighted” to accept them.

So on February 13, 2020, Father Daily, along with Deacon Harris, as well as fellow seminarians Bert Proulx (Class of 2022) from the Archdiocese of Boston, and Joe Danzi (Class of 2023) from the Diocese of Brooklyn, made the 24-mile trek from Weston to Lowell, delivering the baby shower contributions along with a $400 check to the PCC. “We are very grateful to Pope St. John Seminary for coordinating this drive to support new Moms and families in need,” said Hines. 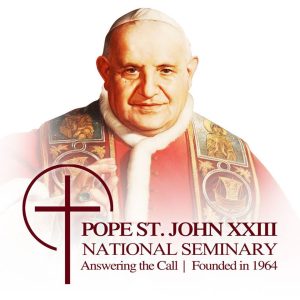 Deacon Harris intends to organize another drive next year to support the PCC and hopes to make it an annual tradition on campus.  “It’s our responsibility to safeguard life,” he declared. Father Daily agrees. “We are called to serve the dignity of every human being and witness to that dignity for all.”  So, get your gifts ready next January—because you’re invited to a baby shower here at PSJS, a celebration of God’s sacred and wondrous gift of life!

Deacon Harris was ordained to the Transitional Diaconate on April 15, 2020, and has an additional year of theological studies and spiritual formation before petitioning for Ordination to the Priesthood in 2021.