On a breezy day on the shore of the Manatee River in Bradenton, the faithful gathered for a Mass that not only commemorated the 35th Anniversary of the founding of the Diocese of Venice in Florida but also celebrated each Catholic who came before and all who go forward serving as a Disciple of Christ. 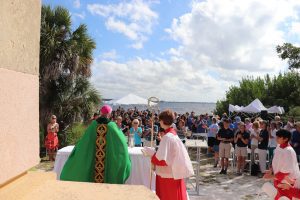 Bishop Frank J. Dewane noted the Mass was celebrated at the historic location, in front of a Holy Eucharistic Memorial, which was built in the 1960s to commemorate the 1539 Spanish Expedition of Hernando de Soto. The group purportedly landed nearby and included 12 priests and two brothers. Appropriately, there were 12 concelebrating priests and two deacons present for the Mass.

Just as the Lord guided those priests to the shores of Florida nearly 500 years ago, today each of us is called to be more a man or women of God, Bishop Dewane explained. One way to accomplish this is to be a Disciple of Christ, something which is going to be a recurring theme of the Anniversary Celebration in the coming months. This call to a be a Disciple is an answer to Jesus asking, “Who do you say that I am?” 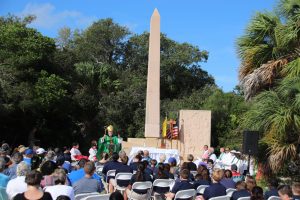 “You must publicly respond and live the answer as a Disciple,” the Bishop continued. “Do this by setting an example to those around you so that others – through your invitation, through your example, through your words, and through your deeds – can understand your answer.”

Being a Disciple of Christ is a response to the living God, who is in our midst, Bishop Dewane added. “We must respond in our soul and live out our answer to the question of who Jesus is in our lives. Our ancestors who came before answered, and this is why we gather here. We have been passed along the gift of Faith. We have been given the example and heard the call in our lives and continue to hear that call. It must be carried forward from this day.”

More than 200 people, including fifth- to eighth-grade students from St. Joseph Catholic School, participated in the Mass. A steady breeze helped off-set the heat. The response from those gathered was overwhelmingly positive.

“Everything was so wonderful and beautiful,” said Carolyn Reilly of Holy Cross Parish in Palmetto. “I felt a strong connection to the past. It was not just to those first priests who landed here, but to all of the priests who serve in this area.” 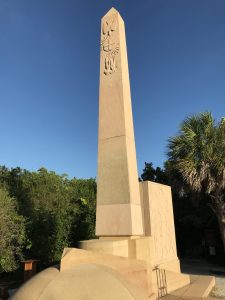 The beautiful setting on the river was on Diocesan property within Riverview Pointe Park, which is adjacent to DeSoto National Memorial Park.

The Holy Eucharistic Memorial was commissioned in 1960 by the Diocese of St. Augustine, which was the only Catholic Diocese in Florida at the time. The memorial was first exhibited at the Royal Academy of Fine Arts in Madrid, Spain, and was at the 1965 World’s Fair in New York. It was later placed at its current location on the shores of the Manatee River.

The memorial includes two carved relief’s depicting a Mass and a Baptism, and a 20-foot obelisk which is figured with carved symbols of the Holy Trinity. A statue of Hernando de Soto was removed after being damaged. Replicas of the statue stand at the Ringling Museum in Sarasota and the Sarasota-Bradenton International Airport. The nearby 60-foot Memorial Cross was dedicated by then-Bishop John J. Nevins in 1996. 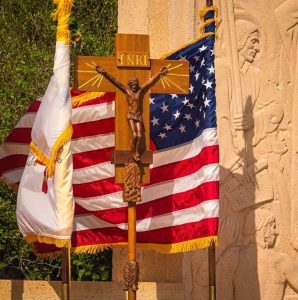 George Parker of St. Joseph Parish said he was inspired by the Mass and the history it represented. “I feel connected to those first priests, and I feel connected to those who were here when the Diocese was founded. We are blessed to still have the opportunity to celebrate the Mass. It is poignant that this Mass was here on this beach, just as they may have done so long ago.”

According to records, several Masses have taken place at the site. Most recently in 2009 when Bishop Dewane celebrated the Mass to coincide with both the 25th Anniversary of the founding of the Diocese and the “Year for Priests.”

A Walk in the Woods (and into the 16th Century) 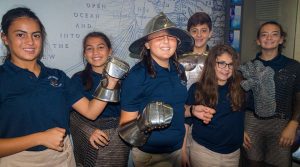 After participating.in the 35th Anniversary Mass, teachers, staff and students from St. Joseph Catholic School took a short hike through the Florida wilderness to follow in the footsteps of the man in which the park is named – DeSoto National Memorial Park.

Members of the National Park Service welcomed their St. Joseph guests with a guided tour of the park’s museum, monument and life size reproductions. The students learned about of the 700-man Spanish expedition which was led by Hernando de Soto. His quest for gold and glory would transform into a four-year, 4,000-mile odyssey of warfare, disease and discovery that would shape the future of trade, religion and politics throughout North America. 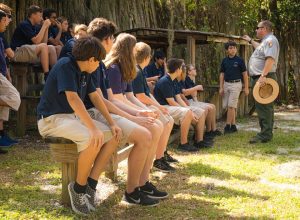 The interactive tour included a video documentary about De Soto’s expedition as well as an introduction of the indigenous tribes who resided in Florida in the early 16th century.

Students also had the opportunity to don heavy helmets, armor and chainmail worn by conquistadors and they then stepped inside replicas of the native American living quarters.

John Carkeet contributed to this report.