The second delivery of items donated by the faithful of the Diocese of Venice has been delivered and distributed to those recovering from the aftermath of Hurricane Michael. 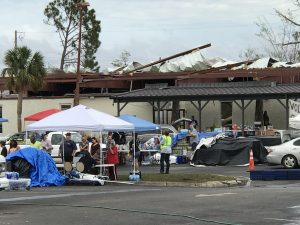 Deacon Henry deMena and Paul Unsworth of St. Agnes Parish helped deliver the supplies to St. Dominic Parish in Panama City on Nov. 2. There he spent the week helping to hand out needed supplies to people who are continuing to struggle to rebuild their lives nearly a month after the storm struck the Panhandle.

“The destruction is truly indescribable,” Deacon deMena said. “The number of homes that are damaged or destroyed is amazing. Entire strip malls turned to rubble. We saw boats on their side in the middle of roads (more than three weeks after the storm); trailer homes either destroyed or lying on their sides; trees that were snapped like twigs, etc.”

The emergency supplies were the result of a Diocese-wide appeal that showed a tremendous response of donated emergency items, including water, food and cleaning supplies. 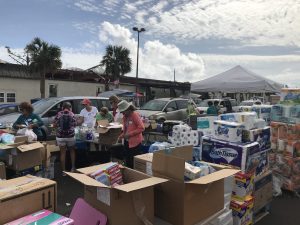 Deacon deMena and a colleague spent the week at the distribution center for food, water, personal hygiene, pet food and many other items located at St. Dominic Parish. The center operated from 10 a.m. to 3 p.m. and had a continuous stream of cars coming through.

“The needs are endless up there and yet everyone who came through the line were so upbeat and appreciative of what we were all doing for them,” the Deacon explained. “As the colder weather approaches people were looking for blankets since many of them are living in a partial home open to the outside.”

The distribution site is in the shadow of the Church, which had major damage. The rectory, parish hall and faith formation buildings were destroyed.

Everywhere he turned, Deacon deMena saw volunteers making a difference, working alongside Catholic Charities staff from across Florida and the nation being Jesus to the poor and downtrodden.

The first wave of supplies from the Diocese of Venice arrived in the Panhandle less than a week after Hurricane Michael struck on Oct. 10. The donations were then consolidated at the Judy Sullivan Family Resource Center of Catholic Charities in Naples.

“I can’t list the many times we saw God’s hand in helping us,” Deacon deMena said of his time in Panama City. “This was a true example of how the Catholic Church works as a united front to care for ‘the least of my brothers.’”