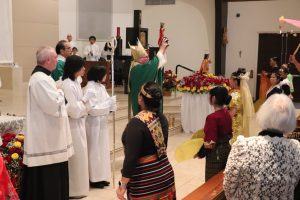 Incarnation Parish in Sarasota was host to the Diocese of Venice Santo Niño Festival on Jan. 15, 2023, the Second Sunday of Ordinary Time. Organized by the local Filipino Catholic Community and the Couples for Christ group, more than 250 people participated in the Mass and Festival which recounts an important conversion story. This was the second year for this festival in the Diocese.

Bishop Frank J. Dewane was the main celebrant for the Mass and said it was an honor to have the Santo Niño Mass and Festival in the Diocese of Venice. “This is a wonderful example of a faith and culture coming together beautifully.”

The Filipino devotion to the Santo Niño is connected to historical accounts which showed that explorer Ferdinand Magellan arrived on the shores of Cebu on March 16, 1521. Soon, Magellan presented the image (a wooden statue about 12 inches tall that bears a golden crown and imperial regalia) of the Child Jesus to Queen Juana, the wife of Rajah Humabon as a baptismal gift, when she, together with other rulers and natives, converted to the Catholic Faith. 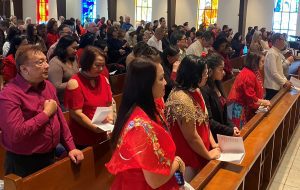 Conflict in the region soon followed during which Magellan was killed and his Spanish colleagues left. The next Spanish expedition occurred in 1565 by Miguel Lopez de Legazpi who conquered Cebu and after pillaging the villages, the original Magellan Santo Niño was found safe and unscathed from the fires. The Franciscan Friars who witnessed this proclaimed the statue miraculous and built a church on the site, which is now the “Basílica Menor del Santo Niño in Cebu.”

The Mass opened with the traditional presentation of the Santo Niño statue to Bishop Dewane; the statue was then placed on a flower-draped pedestal in front of the altar.

Bishop Dewane said the Diocese is richer for those who come from various countries and bring their faith and culture, and how celebrating the various important feast days serves as a bridge in one’s faith, connecting to their homeland.

The Santo Niño celebration calls us to go forward as individuals to behold the Holy Child, the Incarnation of Jesus Christ who was there to save the world, the Bishop added.

“We must celebrate that, but not be caught in the role of the child; we must mature, as Christ did,” Bishop Dewane continued. “In doing so, we are called to be instruments of the Lord within the world, calling others to come and learn about why the Holy Child, the Incarnate Savior, had to be sent into the world. May each one of you be blessed in your devotion to the Santo Niño.” 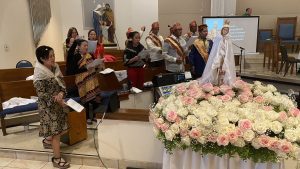 The Feast Day celebration reminds Filipinos of the Christianization of their homeland but also enables them to see the relevance this devotion to the Santo Niño has for people to this day. It places a special emphasis on the children and youth, with all the hopes they raise.

As part of Festival tradition, the faithful are encouraged to bring their own Santo Niño statue, or one purchased in the past year, to be blessed. This was done at the conclusion of the Mass. This builds upon the tradition of Filipino immigrants who brought their Santo Niño statues with them to the United States to be their spiritual recourse, assistant and protector.