A month into the job and Silvia Fedor is finding her way in the Diocese of Venice as the newly appointed Director of the Internal Financial Services Department. 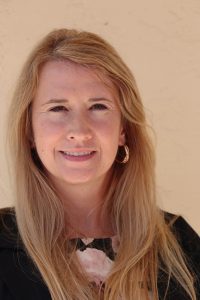 The role Silvia takes on in the Diocese in Internal Financial Services is to ensure the policies and procedures developed by the Diocese are followed by all its entities.

As part of her work, Silvia will visit Parishes and Catholic schools and provide guidance when any issues arise; she views her new role as supportive and plans to do her work with empathy and humility.

A native of Bratislava, Slovakia, Silvia was born in the former Czechoslovakia before immigrating to the United States with her parents in 1985, an experience which shaped her life and grew her faith.

“Growing up in a Communist country, there was no church you could go to,” Silvia explained. “Both of my parents had a strong faith and sought that for their family.”

She joined her parents when they fled Czechoslovakia and she has memories of leaving with the clothes on their back, one suitcase, and nothing else.

The family was first placed in a refugee camp in Europe before they eventually made their way to the United States. Both her parents were well educated, and her mother’s knowledge of the English language was a blessing. She would teach the children in the refugee camp during the day, and in the evenings provided classes for the parents.

The family arrived in Toledo, Ohio, on Dec. 19, 1985, a few days before Christmas. They connected with the St. Stephen Catholic Church, through Father Hernady, a Hungarian priest who helped them meet people in the community. Silvia attended St. Stephen’s Catholic School, where she also received her First Communion.

Even though she was new to the U.S., Silvia had a passion for learning and although she moved several times, she thrived in school and went on to college, eventually graduating with a Master’s in Business Administration, from Marymount University, in Arlington, Virginia.

Silvia made her way to Florida to be closer to her parents, who permanently moved to Sarasota a few years ago, as well as to ensure her daughter could go to school in a classroom after two years of virtual learning.

She credits being a mother of a 9-year-old girl with allowing her to do the work of diving deep into the financial workings of complex organizations with focus and compassion.

“From parenting, you look for resolutions, not conflict,” Silvia said. “The decisions you make are from the heart and sometimes come with tough love.”

Please welcome Silvia Fedor to the Diocese of Venice. She can be reached at 941-484-9543 or fedor@dioceseofvenice.org.