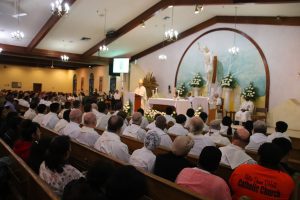 A driving rain storm did little to quell the enthusiasm of the faithful at Our Lady of Guadalupe Parish in Immokalee when they welcomed more than 40 Missionaries of St. Charles (Scalabrinians) who were visiting the parish for the Mass as part of a week-long Provincial Assembly in Boca Raton. 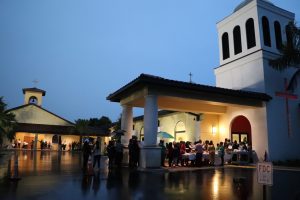 The assembly side-trip to Immokalee for the priests was planned to thank the community for their support of the religious order through the years and to see the progress on the construction of the new Our Lady of Guadalupe Parish Church which is nearing completion adjacent to the existing church.

The first Scalabrinian priests arrived at Our Lady of Guadalupe in 1985 and the community has served there ever since. Several priests who previously served at the parish were present for the celebration and were, following the Mass, individually recognized and cheered by the faithful for their service. 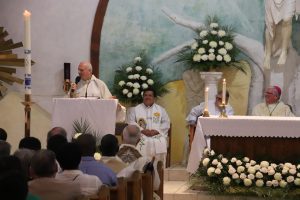 Bishop Dewane expressed his humble and heartfelt gratitude for the years the Missionaries of St. Charles have been in the Diocese, serving the faithful here and continuing to reach out to other missions that were founded.

“I cannot help but express a strong genuine gratefulness and thanks for your vocation, for your choosing to be a member of the Missionaries of St. Charles, and for the sacrifices that you make,” the Bishop added. “Also, for the good that you do for the people of God, and particularly here in Immokalee by building up the faith community.”

The welcome from the parishioners was overwhelming as they packed the church for the tri-lingual Mass (English, Spanish and Creole) and afterwards joyously cheered the visiting priests for their vocation and continued service to the community. 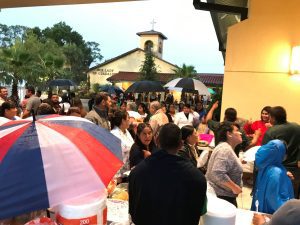 Provincial Father Balen thanked Bishop Dewane for his ongoing support of the Scalabrinian priests who continue to serve in Immokalee. He also thanked the faithful of the parish for their enthusiasm for the visit, noting that the group was expecting a quiet time for Mass and some reflection but instead they were welcomed with joyous open arms that reflect the love of Christ that permeates throughout the parish.

“Thank you to Bishop Dewane and thank you all for the love you have showed us,” Father Balen said in English and Spanish.

The Missionaries of St. Charles – Scalabrinians – are an international community of religious missionaries dedicated to the service of migrants of differing cultures and ethnicities in countries throughout the world. We are a religious apostolic community called by God to share in the mission of the church by helping migrants discover and carry out the plan of salvation during human migration and within their lives.  The Congregation was founded on Nov. 28, 1887 by Blessed John Baptist Scalabrini (1839-1905), Bishop of Piacenza, Italy.

Scalabrinians are committed to the promotion of human dignity and human rights of migrants, including their faith and cultural values.  They are also committed to promote the total salvation of mankind, leading migrants in particular, to a rediscovery of faith in their lives with a longing for dignity and justice.

Following the Mass, a fiesta was held and in spite of the rain, everyone persevered and enjoyed themselves as the food was served under the awning of the new church and all sat at tables under tents set up in the parking lot.

Bishop Dewane noted during the Mass that the new building, which has been under construction for more than two years, will soon be opened and the Holy Sacrifice of the Mass will be offered. “Your patience has been appreciated and you will be rewarded with another celebration very soon.”