Filipino Catholics arounds the Diocese of Venice and around the world have a custom in preparation for Christmas of participating in a novena of Masses at Dawn, known as Simbang Gabi. 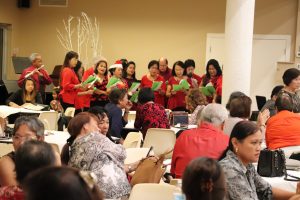 Celebrated at several parishes in the Diocese, for the first time the tradition was celebrated at the Vatican by Pope Francis. The Holy Father opened the celebration at St. Peter’s Basilica on Dec. 15, Gaudete Sunday.

“Through this celebration we want to prepare ourselves for Christmas according to the spirit of the Word of God that we have listened to, remaining constant until the Lord’s definitive coming,” Pope Francis explained.

The Simbang Gabi tradition in the Philippines dates back to the 17th century and was introduced to the Philippines by Spanish friars to allow the farmers to hear Mass before going to the fields early in the morning. Filipinos hang a star outside their homes, and attend early morning Masses on each of the nine days before Christmas. 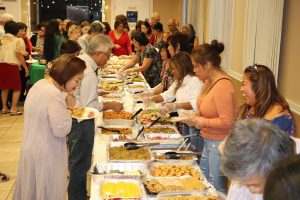 This tradition is also known by its popular Spanish name as the Misa de Gallo, or “Mass of the Rooster,” commonly indicating the pre-dawn Christmas Eve Mass. The novena serves as spiritual preparation for Christmas, in commemorating the birth of Jesus Christ. The celebration is also seen as a way of requesting blessings from the Lord, as most people believe that if one completes the whole series of nine dawn Masses, wishes will be granted.

Pope Francis noted that as Filipinos have migrated throughout the world, their traditions and devotions have followed. In the Diocese of Venice, the full novena has been celebrated at St. Maximilian Kolbe Parish in Port Charlotte for many years. Where the Filipino Catholic community is smaller, Incarnation Parish in Sarasota and St. Andrew Parish in Cape Coral, abbreviated novenas were observed.

Although this tradition is not exclusive to Filipinos, its observance is strong and distinctive in the Philippine Catholic culture.

The Holy See allows the Simbang Gabi Masses to differ from the traditional Advent Season readings and requirements. This exception allows the readings to be directly associated with the Christmas Season and the Church is also decorated while the priests wear white vestments. The exception to this guidance is if the Mass is celebrated as part of Gaudete Sunday, which maintains its precedence.

As at the Vatican, the Simbang Gabi Mass at St. Andrew Parish was on Gaudete Sunday. Following the Mass there was a reception in the Parish Hall where there was a potluck dinner was served with a variety of traditional delicacies including rice cakes, seafood and noodle dishes, as well as pastries and other sweets. The choir sang Christmas songs in English and Tagalog, the language known by most Filipinos,

Tradition dictates that time changes during this celebration of the Holy Mass for the novena. It is no longer the same moment of Advent that is celebrated during the day, everything becomes Simbang Gabi, but when the sun rises it returns to the Advent Season. It is because we are living that magical moment that is before the sun rises.

This is an important and growing Catholic tradition as the faithful prepare their hearts waiting for that dawn when the sun rises. The sun rise is associated with Jesus Christ, bringing with it a new hope, new life.

It is believed that participating in the novena of Masses brings many blessings, mostly for the family. Some also believe that if you attended the Simbang Gabi you would find your future spouse, which naturally increased the popularity of the tradition.