The Diocese of Venice will be hosting the 12th Annual Veterans Day Catholic Mass on Thursday, Nov. 11, 2021, at the Sarasota National Cemetery in honor of all the men and women who have served our country and continue to serve to this day. 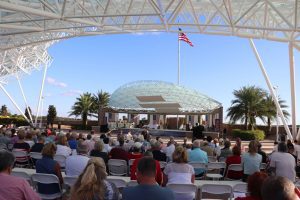 The Mass, preceded by an opening ceremony at 2:45 p.m., will allow the faithful an opportunity to honor veterans and pray for them, many of whom are laid to rest at the Sarasota National Cemetery. All are welcome to attend the Mass. Active military personnel are asked to wear their uniforms for the occasion.

Organized by the Diocese of Venice, with the support of the Knights of Columbus, the annual Mass started in 2010, just two years after the National Cemetery was dedicated. Since that time, the cemetery and Mass have grown. More than 25,000 veterans and their spouses are interred in the National Cemetery since opening.

In 2019, some 1,500 attended the Mass. Due to the COVID-19 Pandemic, the 2020 Mass was livestreamed from Epiphany Cathedral in Venice as Hurricane Eta struck Florida.

Bishop Frank J. Dewane said it is a special privilege that the Diocese of Venice celebrates this Mass for the intention of our veterans each year. “We gather to thank all the men and women who served, and continue to serve, in the armed forces for what they have done so that we can live as we do today. We also comfort those who mourn, honoring those who gave the ultimate sacrifice.”

The opening ceremony will include patriotic music, hymns, as well as the Presenting and Posting of the Colors. The Mass, concelebrated by priests from across the Diocese of Venice, will follow immediately.

After the Mass, Bishop Dewane and concelebrating priests, escorted by the Knight of Columbus Color Corps, will proceed to the nearby graves where they will stand in silent prayer as “Taps” is played.

A military display will be nearby with flags representing the branches of the U.S. Armed Forces including the Army, Navy, Air Force, Marines, Coast Guard, and Merchant Marines.

Sarasota National Cemetery is located on State Road 72 (exit 205 at Clark Road), approximately four miles east of Interstate 75. A water station and restrooms will be in place for the ceremony. There is ample on-site parking available for those in attendance. There will be handicapped parking and golf carts available to shuttle those who need extra assistance. Everyone is encouraged to arrive early.