Built of the shoulders of many before, Catholic Charities USA (CCUSA) has dedicated itself to addressing the human dignity of the individual with a variety of services that are provided with prayer and compassion. 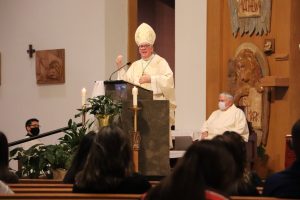 A virtual celebration of the 110th Anniversary of CCUSA took place on Sept. 25, 2020, with a Mass of Thanksgiving celebrated by Bishop Frank J. Dewane and livestreamed to Catholic Charities offices across the nation from Epiphany Cathedral in Venice.

Bishop Dewane, who is the Episcopal Advisor to CCUSA said it was appropriate that the Gospel reading from the day was from Luke 9:18-22, when Jesus asks the Disciples “But who do you say that I am?”

“You stand on the shoulders of the many who came before to create Catholic Charities building a response to the Lord’s call in service to all… each person made in the image and likeness of God,” Bishop Dewane said. “This allows us to respond with a richness of our very being.”

The celebration began with prerecorded opening remarks from Adrian Dominican Sister Donna Markham, PhD, President and CEO of CCUSA, as well as Cardinal Luis Antonio Tagle, the Prefect of the Vatican’s Congregation for the Evangelization of Peoples and President of Caritas Internationalis, a global Catholic charity.

Sister Donna said the timing of the 110th Anniversary celebration, which would have been part of the annual meeting in Cleveland, is a great time to take stock in what Catholic Charities is doing in the midst of a global pandemic, natural disasters and social unrest.

“This is a good reminder that prayer must permeate our hearts and be in the background in all we do,” Sister Donna added. “Prayer has sustained us through all of these years as we are ministers of compassion.”

In his message, Cardinal Tagle thanked the workers and volunteers of Catholic Charities for the heroic work they do, calling them “signs of hope” for humanity. “The work of Catholic Charities is addressing the human being, finding that God is present in all, and that love will triumph over despair.”

To reflect the diversity of the workers and volunteers of Catholic Charities, as well as those who are served each day, the prayers of the faithful were offered in English, Spanish, Haitian Creole and Ukrainian. The livestream was viewed from Catholic Charities offices in Dioceses throughout the U.S. Messages of support and gratitude were posted from across the country including as far away as Alaska, Hawaii, Puerto Rico, Vermont and Texas. 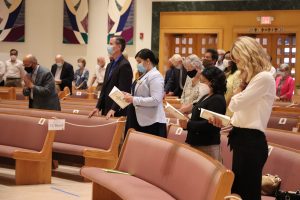 Present at the Cathedral were Catholic Charities Diocese of Venice Inc. staff, as well as members of the various advisory boards from throughout the Diocese. A reception followed in the Cathedral Parish Hall.