It was on Nov. 28 when Epiphany Cathedral was illuminated in red as a sign of unity with persecuted Christians around the world. This was done as part of the annual “Courage in Red” campaign which was to bring attention to plight of our suffering brothers and sisters more dramatically to the attention of faithful. It is reported that are almost 300 million Christians, or 1 in 7, live in a country of persecution, subject to violence, arrest, and human rights violations.

While the one-day “Courage in Red” event was important in spreading the word about the plight of those who suffered for living their faith, the Diocese of Venice Catholic Schools carried that message further. In addition to wearing red on Nov. 28, each school held a held prayer services and/or prayed the rosary for persecuted Christians.

In addition, elementary schools used the “Courage in Red” initiative as the opportunity to teach about the early Christians martyrs. At St. Andrew Catholic School in Cape Coral, the students learned about various martyrs and held special prayer vigils throughout the day. 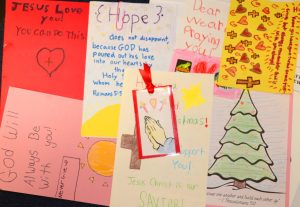 Meanwhile, at Incarnation Catholic School in Sarasota, students created posters about Christian martyrs which included a short biography and later presented what they learned to the school. The school Mass on Nov. 20 was in held in honor of persecuted Christians.

Students at Incarnation and St. Martha Catholic School in Sarasota wrote letters to children in the Holy Land which can be seen in the images below, these letters will be mailed to Aid to the Church in Need, the organizers of the “Courage in red” initative.

One letter read: “Dear children, We are first graders in America. We want to say hello and Merry Christmas to you. We pray for your peace and hope that someday, you can practice your faith freely. Sending blessings to you. From your Friends.” The letters also included drawings of doves and peace symbols as well a Child’s prayer for peace. 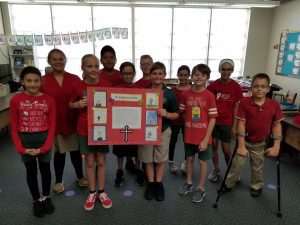 The Diocesan high school students also watched the new documentary “Christians in the Mirror” which compares and contrasts the plight of persecuted Christians in the Middle East and Africa in contrast to other Christian Churches which live in relative peace.

St. John Neumann Catholic High School students in Naples were asked to write down their initial thoughts on the documentary.

One students wrote: “Everything in movie really stood out to me. I have always known about Christian persecution, but I have never really understood how bad it truly is. One thing that stood out to me in particular was how everyone responded to the hurting.”

Another added: “One specific part of the “Christians in The Mirror” that struck me is that many are happy and grateful. Something that stood out to me is that even though people had their homes destroyed, they are still happy. They are happy because they have Jesus in their lives and they are still alive.”

Still another perspective, “What gave me hope was those survivors. I’m going to embrace my faith and not let anyone tell me I can’t be Catholic or believe in Jesus.”

Lastly, “The video made me think a lot; about my life and how much I take for granted when there are so many people scared for their lives while our generation is scared that their post won’t get enough likes. I’m very privileged to be where I am, to be in this school, and to have a family to go home to everyday.”