A watchful eye is kept on developing storms that can form and potentially threaten Florida in the Atlantic Ocean and the Gulf of Mexico from June through November during Hurricane Season. During Labor Day Weekend Hurricane Dorian devastated the Bahamas before going on to lash the east coast of the U.S. with winds and rain while spreading fear from Florida to the Carolinas and beyond. 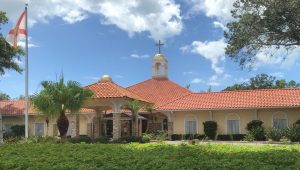 In preparation for Hurricane Dorian, the Diocese of Venice Hurricane Committee met daily as the monster storm loomed in the Caribbean Sea and menaced Florida with some early forecasts ominously aiming directly at Southwest Florida with impacts as early as Sunday, Sept. 1. This committee included leaders of Catholic Charities, which would have led the post-disaster humanitarian response.

The Catholic Center, as well as parishes and schools and other entities, took appropriate measures to secure facilities should the storm approach. Everything that could be done to prepare was done. At the Catholic Center, as a precaution, the hurricane shutters were put up and sensitive electronic devices were covered.

In anticipation of the storm, and out the abundance of caution, parishes were forced to cancel many Labor Day Weekend activities and most delayed the start of religious education programs by one week. While these were an inconvenience, the need for caution and vigilance outweighed all else.

Bishop Frank J. Dewane, who also closely monitored the storm throughout, remained in contact with pastors and administrators throughout the Diocese addressing individual needs as required.

Dr. Ben Moore, Diocesan Superintendent of Schools, was the main contact for the schools in the Diocese, while Philomena Pereira, CEO of Catholic Charities Diocese of Venice Inc., helped to coordinate storm preparations for Catholic Charities entities and set up a plan to respond immediately following the storm with emergency supplies to designated areas.

The challenge in Dorian was that there were many unknowns, and each notification in the forecast changed the potential impacts to different parts of the region. At certain points the storm was expected to cross Florida on top of the Diocese. Such a path would have been crippling, so preparations and plans had to be put in place.

Thankfully, prayers were answered, and the Diocese was spared. The last area to have any type of impacts from Dorian was Highlands County which was under a Tropical Storm Warning for two days. There St. Catherine School in Sebring was closed on Sept. 3 and 4 and parish activities and hours were limited. Schools in Collier County were also closed Sept. 3, while other schools remained open.

Because of the storm, Bishop Dewane postponed Masses for students at St. Ann Catholic School and St. John Neumann Catholic High School in Naples on Sept. 3, as well as a Mass on Labor Day for the students and faculty of Ave Maria University. These are in the process of being rescheduled as quickly as possible.

Many still have fresh memories of Hurricane Irma from 2017. That storm struck Marco Island and went up the center of the state, leaving in its wake a trail of destruction.  Thousands of families were left with damaged homes and many without power for weeks and dozens of Diocesan buildings were damaged or destroyed. Similar impacts occurred after Hurricane Wilma in 2005 and Hurricane Charley in 2004.

With those memories in mind, as Dorian struck the Bahamas and the U.S. coastline, the focus of many switched for preparation to wanting to help. Residents of the area remember the generosity of outsiders following Hurricane Irma, so the faithful were quick to ask for somewhere to send donations in support of those impacted by Dorian. A Hurricane Dorian fund was created and can be found on the Diocese of Venice website at www.dioceseofvenice.org. Financial donations will be given to organizations assisting the victims of the storm. No Diocesan collections of goods was established given the difficulty in logistics.

While Hurricane Dorian ultimately only inconvenienced the region, it served as a stark reminder for all to remain vigilant throughout the remainder of the Hurricane Season and always have plenty of emergency supplies on hand ahead of time before supplies run out. We all must be vigilant and take action should a storm threaten.