For the past four years the Hispanic Ministries outreach of the Diocese of Venice has strived to meet the needs of those desiring to be better formed in their Faith.

The Spanish-language Faith Formation Program recently distributed certificates of completion to 219 students, bringing the four-year total to more than 1,500. 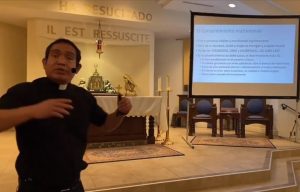 Father Claudio Stewart, Diocese Hispanic Ministries Director, explained that the latest program “The Seven Sacraments” was a natural follow-up to the original Faith Formation offerings. That initial three-year program (2018-2020) included a series on the “Magisterium,” with a thorough explanation of the Catechism of the Catholic Church; “Revelation and Introduction to the Sacred Scriptures;” and the “History and Tradition of the Church.”

Spanish Faith Formation Program sessions were developed immediately following the local consultation process of the V Encuentro in 2016 and 2017 with the support of Bishop Frank J. Dewane.

The V Encuentro was a multi-year outreach initiated by the U.S. Conference of Catholic Bishops, with a goal of discerning ways for the Church in the U.S. to better respond to the needs of the ever-growing Hispanic presence. The process involved consultations at the Parish, Diocesan, regional and national levels. A final report was submitted to the Vatican in September 2019 with recommendations for inclusive action at all levels of the Church in the U.S. and are in the process of being implemented.

The idea behind the initial three-step Spanish Faith Formation Program within the Diocese was to quickly help bridge the gap in formation for Hispanics in the Diocese for whom English is not their first language. This gap had created isolation among some, and the program became empowering to Hispanic Catholics who often felt they were outsiders in the Catholic Church within the U.S., primarily due to the language difference. 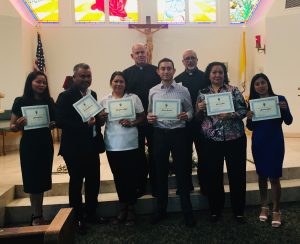 The results were overwhelmingly positive as the program has shown there is a real desire for Hispanic Catholics to be formed in their Faith, Father Stewart explained. This is why the latest class was offered on the Sacraments and he was pleased that even during the Pandemic the interest to participate remains high with more than 350 taking part in at least one of the classes.

The benefit of having the formation program in Spanish was to allow the students the opportunity to better absorb the complexities of the Faith without the extra work of translating the information. This also helped streamline the instruction and allowed for a more open discussion. At the conclusion of each program year, those who earned the certificates were encouraged to use their new-found knowledge to evangelize in their Parish community.

The Faith Formation classes were divided into five geographic regions of the Diocese to allow easier access to the courses. Each region is under the guidance of a secretary, Azecena Calzada of Sacred Heart Parish in Bradenton; Luz Janeth García of St. Leo the Great Parish in Bonita Springs; Fatima Salto of St. Margaret Parish in Clewiston; Maria G. Muñoz of St. Paul Parish in Arcadia; and Deacon Roberto Landrón of St. Agnes Parish in Naples. Father Stewart said these key people deserve credit for their continuous work and dedication to the Formation Program.

Students could participate in-person or online, with videos produced with the assistance of Victor E. Michel and Sacred Heart Parish Youth Group in Bradenton. Instructors included nine priests and two women religious. Each level became increasingly sophisticated, challenging the participants to take a fresh look at the Catholic Church.

Father Stewart has reaffirmed there is more in the planning process for expanding Hispanic Faith Formation within the Diocese. However, the ongoing Pandemic caused delays in implementing some of those plans.

Other actions taken since the local V Encuentro sessions have encouraged a broader outreach and inclusion in existing Parish and Diocesan events. This means having sessions in Spanish at conferences, bilingual programs, and other steps that will help unify the Catholic Church in the Diocese of Venice. As this is the focus of Dioceses across the country, the goal is to create a stronger Catholic Church in the U.S.

“There is not supposed to be a separate Faith for English speakers versus Spanish speakers,’ Father Stewart explained. “We are all part of the same Universal Church – founded by Jesus Christ.”

To learn more about other Diocese of Venice initiative through the Hispanic Ministries Office, please email pastoralhispana@dioceseofvenice.org, or visit www.dioceseofvenice.org/offices/offices-departments/hispanic-apostolate.