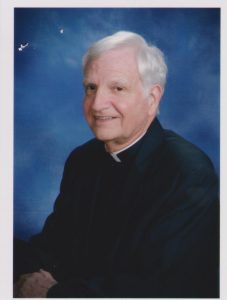 Father Mattingly was raised in Washington, D.C., and later studied electrical engineering before training at the National Security Agency in computer research before converting to Catholicism. He discerned a vocation to the priesthood and studied at Niagara University in Lewiston, N.Y., and then St. Mary’s Seminary and University as well as Loyola University, both in Baltimore, Maryland. He was ordained to the priesthood on May 18, 1968 for the Diocese of Savannah. He served in Catholic schools and Parishes in the Savannah Diocese before entering the Benedictine Abbey in Pecos, New Mexico where he did retreat work and coordinated the School for Spiritual Directors. It was in June 1990 that he requested assignment within the Diocese of Venice in Florida to be near his aging parents.

Within the Diocese of Venice, Father Mattingly served as Parochial Vicar at Epiphany Cathedral and then at Ss. Peter and Paul the Apostles Parish in Bradenton. He was incardinated into the Diocese of Venice on Dec. 23, 1991. Father Mattingly was appointed Administrator at St. Maximilian Kolbe Parish on July 1, 1994, and one year later was named Pastor. He served there until his retirement on June 30, 2006. In his retirement Father continued to assist at Parishes throughout the Central and Northern Deanery of the Diocese and enjoyed reading and traveling.

Please pray for the repose of the soul and consolation of his family. May his soul and the souls of all the faithful departed through the mercy of God rest in eternal peace.