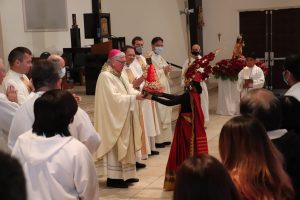 Incarnation Parish in Sarasota was host to the first ever Diocese of Venice Santo Niño Festival on Jan. 16, 2022. Organized by the local Filipino Catholic Community and the Couples for Christ group, more than 250 people participated in the Mass and Festival which recounts an important conversion story.

Bishop Frank J. Dewane was the main celebrant for the Mass and said it was an honor to have the Santo Niño Mass and Festival in the Diocese of Venice. “This is a wonderful example of a faith and culture coming together beautifully.”

The Filipino devotion to the Santo Niño are connected to historical accounts which showed that explorer Ferdinand Magellan arrived on the shores of Cebu on March 16, 1521. Soon, Magellan presented the image (a wooden statue about 12 inches tall that bears a golden crown and imperial regalia) of the Child Jesus to Queen Juana, the wife of Rajah Humabon as a baptismal gift, when she, together with other rulers and natives, converted to the Catholic Faith. 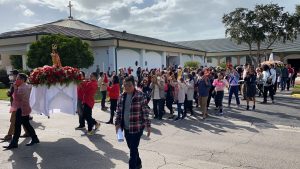 Conflict in the region soon followed during which Magellan was killed and his Spanish colleagues left. The next Spanish expedition occurred in 1565 by Miguel Lopez de Legazpi who conquered Cebu and after pillaging the villages, the original Magellan Santo Niño was found safe and unscathed from the fires. The Franciscan Friars who witnessed this proclaimed the statue miraculous and built a church on the site, which is now the “Basílica Menor del Santo Niño in Cebu.”

The Mass opened with the traditional presentation to the Bishop of the Santo Niño statue which was then placed on a flower-draped pedestal in front of the altar.

Father Lino Estadilla, OMV, of Our Lady of Perpetual Help Retreat Center in Venice, gave the homily and explained that the presentation and dance is symbolic of the conversion of faith for the Filipino people. The presenter dances two steps forward and one step back. This symbolizes the initial conversion of the Filipino people to Catholicism, one step back representing the intervening turmoil, and finally the discovery of the Santo Niño statue which immediately solidified the conversion of the entire island nation nearly overnight. 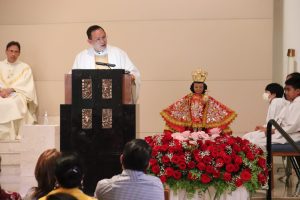 It was explained that this Feast Day celebration reminds Filipinos of the Christianization of their homeland but also enables them to see the relevance this devotion to the Santo Niño has for people to this day. It forces us to focus on the children and youth, with all the problems they may pose and the hopes they raise.

Lars Sison, a youth from Bradenton, shared his devotion to Santo Niño by recounting the story of how his 1 ½ year old sister nearly drowned in a pool during a family get together on the Feast of the Epiphany (Jan. 6). While a nurse was present and helped as much as she could, while they waited for an ambulance to arrive a Santo Niño was brought from the house and placed next to the child, and everyone joined in prayer for the intervention of Santo Niño. The child was transported to the local hospital and then flown to All Children’s Hospital in Tampa. While she was in the pediatric ICU the family continued to pray for the intercession of Santo Niño for the girl. A Parish priest from Ss. Peter and Paul the Apostles Parish went at the request of the family to the hospital to bless the child and a Santo Niño prayer group based in Tampa was asked to pray for her recovery.

Lars explained how virtually overnight his sister began to make a miraculous recovery and was released from the hospital on the day before the third Sunday of January, the Vigil of the Feast of Santo Niño. While it was unclear how long the little girl was in the water, she was found floating face down, she survived and has thrived with no lasting impacts from the near-drowning.

As part of Festival tradition, the faithful are encouraged to bring their own Santo Niño statue, or one purchased in the past year, to be blessed. Father Estadilla did this at the conclusion of the Mass. This builds upon the tradition of Filipino immigrants who brought their Santo Niño statues with them to the United States to be their spiritual recourse, assistance and protector.