No structure in Matlacha or on Pine Island – home to fishermen, farmers, artists, and retirees – was spared the wrath of Hurricane Ian. The southern region was inundated with storm surge and had high winds, while the northern sections still had wind gusts more than 130 mph. 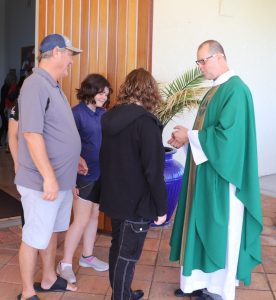 Fortunately, Our Lady of Miraculous Medal Parish in Bokeelia was spared the surge and catastrophic damage. While the church and Parish Hall had damaged tiles and some water inside both buildings, the Parish chapel and education building suffered the most severe impacts. The chapel, which was the original church, had an air conditioning unit torn out, exposing the building to heavy rain which damaged the interior.

However, having been spared the worst damage, Father Jacek Mazur, Miraculous Medal Pastor, had the church open for Mass on Sept. 29, 2022, the day after the storm. In attendance in the darkened church was one family of four. Masses remained in the dark for two weeks before power to the island was restored.

“And from there the numbers have steadily grown,” Father Mazur said. “It has been beautiful.”

Each Mass is filled with reunions of friends, with lots of hugs and smiles as everyone is asked how they fared during the storm.

The destruction to some parts of the community has brought a profound sadness to many, but all feel blessed and grateful to be alive and safe. 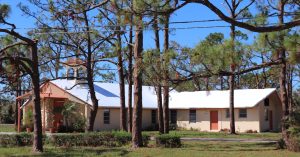 “The church is a place of reflection and comfort,” said Mary Davis, whose roof was partially torn off. “I feel so happy to be here and to see that the church is here and not badly damaged. It’s going to be okay. God was with us.”

Our Lady of Miraculous Medal is also the location of the Pine Island Food Pantry, which serves about 150 families a month and is supported by all of the churches on the island with additional assistance from Publix and Winn-Dixie, as well as the regional Harry Chapin Food Bank in Fort Myers.

Since Ian, the food pantry has been open nearly every day, with supplies going out almost as fast as relief was coming in from the outside, explained Diane Gleason, longtime resident and former Parish bookkeeper who now helps run the pantry.

“People have brought us everything from cleaning supplies and food and everything in between,” Gleason said. “We were running five days a week and have reduced to three days a week (effective Oct. 24) in person, and two days delivering to families who can’t get to the food pantry. These are the elderly, and the many who lost vehicles to the water.” 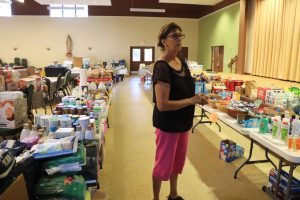 About a third of those seeking help were regulars before the storm, the rest are those in dire situations after. Donated items that have been dispersed beyond food and water include air mattresses, sheets, pillows, diapers, tarps, blankets, fans and cleaning supplies of all sorts.

Father Mazur, who remained on the island in the rectory during the storm, said during a Mass on Oct. 23, that Sacred Scriptures must remind us of the trust, love, mercy, and healing of the Lord.

“It is at this moment that we take a moment to examine our conscience; having been so touched by grace,” Father said, noting that many strangers came bringing all kinds of food and supplies; or offered help cleaning up or putting a tarp on a roof. “The Lord’s goodness toward the people He created is very beautiful and very tender, attentive to their needs and their condition.” 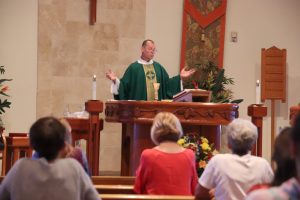 The Gospel reading for the 30th Sunday of Ordinary Time, Luke 18: 9-14, the parable of the tax collector and the Pharisee, was appropriate for those recovering from Ian, Father Mazur explained.

“The Lord hears the cry of the poor,” Father Mazur continued. “He rescues His people from all pain and distress. The Lord is close to the brokenhearted, He saves those who are crushed. He’s not deaf to the widow when she pours out her complaint. All of us will be rescued, will be helped, will be comforted. Therefore, we proclaim, ‘I will praise the Lord at all times; His grace shall ever be in my mouth.’ Today’s Scripture calms our hearts and our spirits, reminding us to trust in God; to hope in His providence, in His protection and in His healing… We have been tried, but we are not abandoned.”