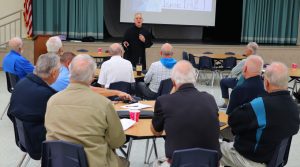 Bishop Frank J. Dewane introduced Father Martis, a Benedictine monk of Marmion Abbey and a well-known sacramental theologian who was in the Diocese of Venice for the annual Priest Convocation in the first week of December.

While in the Diocese Father Martis also offered his expertise to a gathering of Diocesan musicians at St. John XXIII Parish in Fort Myers on Dec. 5.

During his presentation to the deacons on Dec. 7 Father Martis focused on the importance of the liturgy noting that a deacon is intimately connected with the life of the community. “The role of the deacon is to act in the best of his ability as a model for the people and show them what they are supposed to do. You articulate what the truth is.”

Father Martis noted that every moment of the Liturgy has a specific purpose and meaning and the corresponding actions by a deacon matter. Therefore, the Liturgy is not a place to let individuality shine through, he continued. “It is a place of becoming united, formed into the Body of Christ. Liturgy that manifests division does a disservice to prayer.”

The Liturgy, actions and meanings of which are described in detail in the General Instruction of the Roman Missal Rite books and the Ordo, is a ritual of repetition, a process that repeats our pilgrimage to Heaven, Father continued.

“Our unity is manifested in common gestures, shared actions and joining our voices into a harmonious voice of Christ,” Father Martis explained. “The Deacon has his own role in the Liturgy: proclaiming, occasionally preaching; universal prayer, assisting the priest, and modelling for the people their gestures and postures.”