Bob Reddy – Florida Catholic
Many people in the United States observe Yom HaShoah, which is also known as Holocaust Remembrance Day. It commemorates the lives and heroism of the Jewish people who were slaughtered by the Nazis between 1933 and 1945. 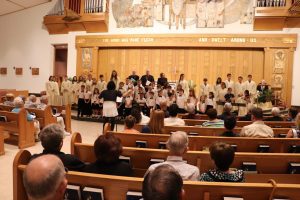 Here in the Diocese of Venice, Bishop Frank J. Dewane hosts an annual interreligious gathering of Yom HaShoah: An Hour of Remembrance. This year the event was held on April 15 at Epiphany Cathedral, Venice, just a few days after April 11, the traditional Remembrance Day.

The powerful hour includes a symbolic reading the names of infamous concentration camps, a moment of silence, the lighting of 13 memorial candles, a guest speaker, presentations, music, and the commissioning of high school students to be a continuing voice for those lost in Holocaust. 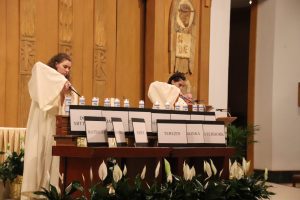 Afterwards the guests went to a reception in the Parish Hall where there were also displays of research projects done by middle schoolers from Epiphany Cathedral and St. Martha Catholic schools. These covered topics of research on the stories of those whose lives were taken too soon, or of the incredible story of survivors.

Lisa Arnold said she had never been to a Holocaust Remembrance at a Catholic Church before and was impressed by the entire commemoration. “Millions were lost, but people forget. They forget the voices that were silenced. It is so good for us all to remember such a terrible time in the world. It can never happen again.” 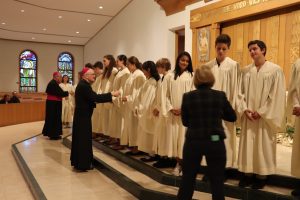 Bishop Dewane spoke briefly about the need for such gatherings which bring together members of the Catholic and Jewish communities to recommit to the promotion of peace and solidarity among all peoples.

Using the example of a recent poll, the Bishop noted that two-thirds of American millennials (18-34), and 41 percent of adults as a whole, cannot identify what Auschwitz is. Another 22 percent of millennials said they haven’t heard of the Holocaust or are not sure whether they’ve heard of it. The numbers are discouraging, meaning the Holocaust is starting to fade for the collective memory.

“As generations inevitably die off, it is our responsibility to continue to raise awareness and that task has become ever greater,” Bishop Dewane continued. “Unless we do something and say something, those numbers will continue to rise and history will be repeated.” 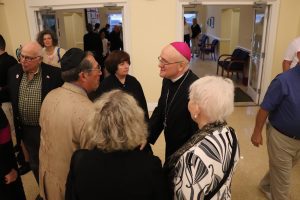 One way to help avoid this is the ongoing effort of the Catholic Schools in the Diocese to have comprehensive program to educate middle and high school students on the Holocaust through various means, explained Dr. Kristy Swol, Diocese Director of Education. “It is hoped that by learning about the Holocaust, they learn about the past and also how to protect the future,” Swol concluded.

This year the featured guest speaker Auxiliary Bishop James Massa of Diocese of Brooklyn, and past-Executive Director of the U.S. Conference of Catholic Bishops’ (USCCB) Secretariat for Ecumenical and Interreligious Dialogue and later Consultor to the Pontifical Council for Interreligious Dialogue, and a member of the Joint Working Group between the Holy See and the World Council of Churches. 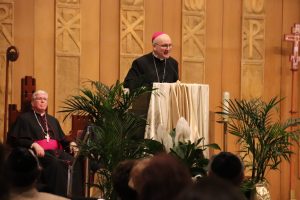 Bishop Massa spoke about the need to properly develop one’s conscience to respond to injustices such as the Holocaust. Using the example of the White Rose Society, a group of university students who were publicly against the atrocities that the Nazi regime and did so by distributing leaflets at their school and throughout Munich, Germany in early 1943.

Bishop Massa noted that the courage of the group, of whom the most well-known being Sophie Scholl, is remembered for appealing to the conscience of their countryman. Sadly, for their actions, Sophie and others were executed by guillotine. Today they stand as martyrs who show that conscience really is essential in opposing evil and restoring justice in the world.

“Interfaith dialogue has among its great truths, the belief that we can share the richness of our respective traditions and strengthen our own identity within our own tradition,” Bishop Massa stressed. “Christians and Jews need one another. And together we need the followers of the world’s great religions to plant new seeds of interreligious understanding so that the soil of the 21st Century leaves no room for violence to sow. Heart must speak to heart. That is what we need today; to enter the conscience. Why do we do this? So that the world might be healed.”