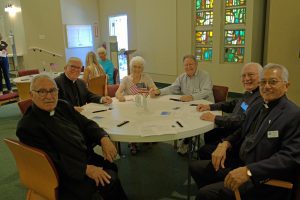 The Very Rev. Fausto Stampiglia, S.A.C., V.F., Pastor of St. Martha Catholic Church in Sarasota, was honored as a “Good and Faithful Servant” by the Sarasota Ministerial Association (SMA) at its 20th Anniversary Luncheon in Sarasota on May 26, 2021.

Bishop Frank J. Dewane attended the luncheon and gave a special blessing for Father Stampiglia, who was handed the “Good and Faithful Servant Award” by previous recipients.

Chaplain Tom Pfaff, President of the Ministerial Association says Father Fausto is a very deserving and dedicated priest who has been with the organization since the early days of its founding.

“He was reluctant to accept this year’s award, but about a year after we started the Association, Father Stampiglia joined as a member,” Pfaff said. “He builds pathways among faith-based organizations and the Sarasota community.”

Father Stampiglia was born and raised in Rome, Italy and ordained there on Nov. 27, 1960, as a priest of the Society of the Catholic Apostolate, known as the Pallottines. Father has the distinction of being the first Pastor of St. Martha Church who belongs to a religious order.