With a shower of confetti, the inaugural Diocese of Venice Lion Cup Robotics Tournament got off to a rousing start on May 14, 2022, at St. Francis Xavier Catholic School in Fort Myers. 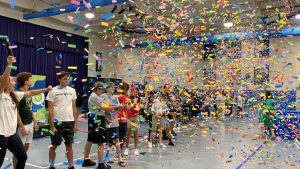 The Lion Cup – a STREAM (Science, Technology, Religion, Engineering, Arts, Math) middle and high school robotics tournament, included 150 competitors, 23 teams, representing 13 Diocesan Catholic schools. The competition was fierce, and the intensity built as the day progressed and the participants became laser-focused on being the best.

Emily Graham of the middle school Shambots 2 team from Donahue Catholic Academy of Ave Maria Parish said the team prayed and sought the intercession of the Blessed Virgin Mary for success in the competition.

“We worked so hard to get ready and it was so much fun to compete against the other schools and then we won,” Emily, a 6th grader said with a big smile. “These robots are so amazing. We worked together to get everything to work.” 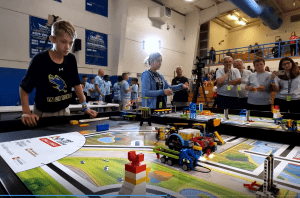 Jackalyn Flynn, a member of the Dollar Store Stark Industries team from Bishop Verot Catholic High School in Fort Myers, said the competition was tough but she had lots of fun. “This was hard. We just created our team and learned so much from this competition. We will do better next year.”

In a welcome video message from Bishop Frank J. Dewane, he described the students as pioneers forging a path for the next generation of leaders and innovators and believers.

“Your ideas and enthusiasm show no bounds as we celebrate the creative challenge founded on the Gifts of Christ,” Bishop Dewane said. “The Lion Cup is more than a friendly competition among Catholic schools, it demonstrates that STREAM is a faith-infused program that can help solve many of the world’s most daunting problems by upholding Catholic values and teaching the principles of strength, utility and beauty. The Lion Cup showcases that Diocese of Venice Catholic schools are preparing students who are ready to build, lead and succeed in a time when science and technology are at the forefront of nearly every facet of our lives.” 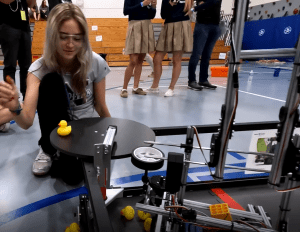 The competition was fierce as teams programed their robots to accomplish various tasks in a specific order in a limited amount of time. The middle school robots are made from Lego pieces and as they go through the obstacle course, their autonomous robot picks up items along the way. Teamwork comes into play in design, construction and strategy. The high school robots are 10 times larger and are both autonomous and have a remote control.

Just before the competition began, teams were allowed to practice on the designated courses and test their work. Many teams made adjustments before the actual competition began and then the intensity and focus of the participants was ramped up. With their teammates/classmates cheering from the sidelines, each completed – or failed- task evoked a reaction.

The teams were judged on robot design, accuracy, efficiency and other factors. Awards were presented to the top teams at the end of the competition. 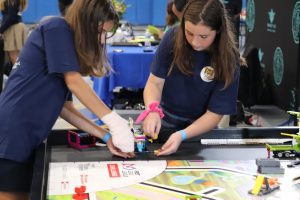 Father John Belmonte, SJ, Superintendent of Catholic Education, said it was a great day, beyond his wildest dreams, giving much credit to Jennifer Falestiny, Diocesan Curriculum Coordinator and leader of the STREAM initiative in the Diocesan schools.

“What a huge success. So much virtue was shown here today,” Father Belmonte said. We do all of these things to give glory to God. That’s why our schools exist. That’s why our teachers teach. That’s why your parents send you to the school – everything to God’s glory.” 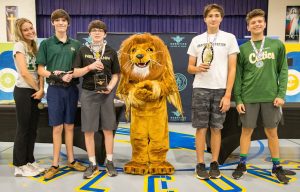 The Lion Cup honors St. Mark, one of the patron saints of the Diocese of Venice, whose symbol features a winged lion. The competition also pays homage to Leonardo da Vinci, inventor of many of the first robots, one of which resembles a lion.

“Da Vinci’s works incorporate three design attributes developed by Vitruvius, a famous Roman architect and engineer: Firmitas (strength), Utilitas (utility) and Venustas (beauty),” said Father Belmonte. “All three of these attributes will be aspects of our students’ robotic designs. The students have been preparing for this tournament for months and were eager to compete.” 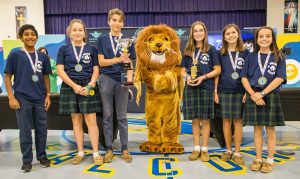 Special awards were presented to the teams that reflected the attributes of Firmitas, Utilitas, and Venustas.

The Department of Education at the Diocese of Venice plans to host larger robotics competitions every year, possibly opening the invitation to other schools throughout Florida.

The winning teams were:

Firmitas – Strength – St. Mark the Evangelist – Co-Patron of the Diocese of Venice