The passing of Pope Emeritus Benedict XVI has brought a time of mourning and reflection among the Catholics of the world. 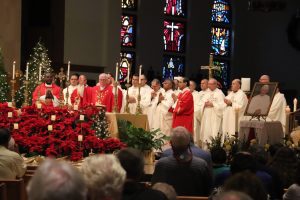 Bishop Frank J. Dewane issued a statement within hours of the passing of Pope Benedict to the faithful of the Diocese of Venice: “The Catholic Church throughout the world mourns the death of Pope Emeritus Benedict XVI who died today, December 31, 2022. We are saddened by the loss of such a renowned, humble scholar and Shepherd, who gave his life to the service of the Universal Church. The longest living Pope, he was a giant of faith and reason.”

Bishop Dewane celebrated a Mass for the repose of the soul of Pope Emeritus Benedict XVI at Epiphany Cathedral in Venice on January 4, 2023. 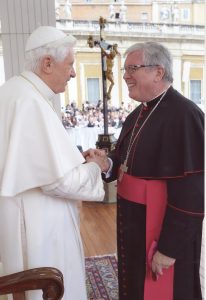 The two also met while then-Msgr. Dewane was working at the Vatican and then during several brief meetings since being ordained as Bishop of the Diocese of Venice in 2006.

“I had the opportunity to speak with him on a number of occasions and was particularly touched by his kindness and humility as well as the warmth and encouragement he imparted to all,” Bishop Dewane said. “Appointed by His Holiness Pope Benedict XVI as Bishop of the Diocese of Venice, I have always had a special place for him in prayer and indeed will continue to remember him.”

Bishop Dewane worked at the Vatican starting in 1995 at the Pontifical Council “Cor Unum” and was later appointed Under Secretary of the Pontifical Council for Justice and Peace, a time when Cardinal Ratzinger was Prefect for the Congregation for the Doctrine of the Faith and through his election to the Papacy in April 2005, for which then-Msgr. Dewane was present in St. Peter’s Square for the announcement of the new Pope, Benedict XVI.

The pair met for Vatican related matters but were engaged in very different matters and at different levels. “He always recognized me as an American saying, ‘I know you, you work here,’ and we would share comments on that.”

Following his appointment as Co-Adjutor Bishop of the Diocese of Venice in 2006, the meetings became less frequent, but still impactful. Such encounters included Bishop Dewane during his tenure as a member of the Pontifical Council “Cor Unum,” as well as other working visits to the Vatican through the years. Other interactions occurred during the 2008 visit to the U.S. by the Holy Father as well as World Youth Day 2008 in Sydney and World Youth Day 2011 in Madrid.

In what would be their final meeting, Bishop Dewane was part of a group of Bishops from Florida who were at the Vatican in May 2012 as part of their Ad Lumina visit. During that gathering, the Bishops presented their quinquennial reports on the status of their respective Dioceses, which included an audience with the Holy Father.

Bishop Dewane described the encounter at the time: “It is an exciting and moving experience. The Successor of Peter is a profoundly holy man and you see that in him. Each personal audience is a special occasion.”

During the visit, Pope Benedict presented each Bishop with a gift of a pectoral cross, known as a Benedictine cross. The gold-plated cross is a replica of a 14th Century crucifix that hangs in the Benedictine mother-church at St. Anselm in Rome. On the reverse side of the cross is the Papal Coat of Arms. It is a gift Bishop Dewane treasures to this day and wears during the Holy Sacrifice of the Mass.

“It was an unusual gift and something that came from the heart of the Pontiff to the Bishops of the world,” Bishop Dewane said.

In his statement following the death of Benedict XVI, the Bishop concluded: “While we mourn the death of this holy man, we continue to pray: ‘Eternal rest grant unto him, O Lord, and let perpetual light shine upon him. May his soul and the souls of all the faithful departed, through the mercy of God, rest in peace. Amen.’”